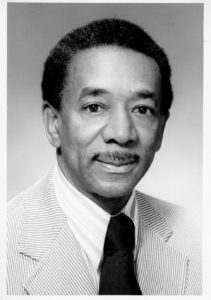 In 1950, Dr. Bascom Waugh became the first African American doctor to join the medical staff at Cooper University Health Care. A World War II veteran, Dr. Waugh was a former flight surgeon for the 332nd Fighter Group, the legendary Tuskegee Airmen. According to a 2007 Air Force School of Medicine report, Dr. Waugh was one of the first two African American doctors to be trained alongside Caucasian physicians in the Army’s School of Aviation near San Antonio, Texas. He joined seventeen other African American flight surgeons supporting the approximately one thousand Tuskegee-trained pilots, and he was one of only six who served in combat during the war. When he returned from the war in 1946, Dr. Waugh opened a family medicine practice in Camden, where he worked until he died in 1992.

“My father was the kind of person who got up early every day, did his exercises, got dressed, and went to work,” Dyann Waugh, Dr. Waugh’s daughter, once told a local newspaper reporter. “He didn’t talk about himself … he was a very humble person.” Waugh, who became a doctor like her father, remembers him saying, “Kid, you got to treat people the way you’d like to be treated.” 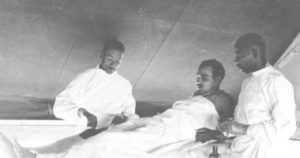 Black and white photograph of 99th Fighter Squadron pilot Lee Rayford having shrapnel removed from his leg after his plane was hit by flak during an escort mission over Germany. 301st Fighter Squadron flight surgeon Bascom S. Waugh is removing the shrapnel. © Chanute Air Museum, All Rights Reserved 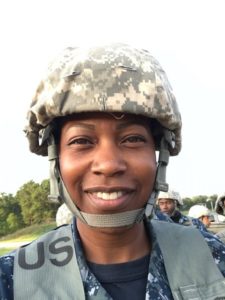 In 2019, Ella Hawk, MSN, RN, AGACNP-BC, a thoracic surgery nurse practitioner with MD Anderson Cancer Center at Cooper, was recognized as Cooper’s Military Employee of the Year. She has been an employee of Cooper since 2010, and has been a member of the United States Navy Reserve since 2013. As a Navy nurse, she had served at Walter Reed Medical Center as a critical care nurse during an acute nursing shortage in 2014. She also helped to establish the Field Operational Hospital at Fort McCoy in Wisconsin, becoming the division officer of its medical Intensive Care Unit in 2017. Based on her knowledge and experience, she was hand-selected for annual training aboard the Medical Hospital Ship USNS Comfort. In July of 2019, she was deployed to serve a tour of duty at the Navy Hospital in Okinawa, Japan. Hawk has been selected for promotion to Lieutenant Commander, and will be training in Guam this year.

For Black History Month, she shared with us her reflection on the legacy of Dr. Bascom Waugh:

“As we celebrate Black History Month, I am reminded of the great sacrifice of those who have gone before me. I stand on the shoulders of many who have sacrificed their lives for the many freedoms I am afforded today. Cooper University Hospital has a rich history of supporting our military. I am particularly grateful to the trail blazing of Dr. Bascom Waugh who was the first African American physician, World War II veteran, and former flight surgeon of the 332nd Flight Group of the Tuskegee Airmen. He was the first African American to join the Cooper University Hospital staff in 1950. His legacy of service and work at Cooper has opened the door to the wealth of contributions that has impacted our military health care professionals. Our HeroCare and Strategic Medical Asset Readiness Training (SMART) programs are designed around providing care, education, and support for our veterans and their families. SMART provides operational and medical readiness training to ensure our military maintains a medical-ready force. We are able to apply the skills and share our knowledge gained to educate not only our fellow colleagues but in service to our patients and the community. I am proud to serve and forever grateful to Dr. Waugh for his dedication to service, community, and medicine. I would also like to thank Cooper University Hospital for its unwavering support and commitment to our military.”

“The freedom and liberty we enjoy is much because of the brave men and women of the military who dedicate their lives to protecting the nation.” ~Unknown

During Black History Month, Cooper is reflecting on the legacy of our past and present change makers. These are the people and the moments that have shaped Cooper, impacting the way we serve, heal, and educate today and tomorrow. These are stories and memories to be told, and we’re excited to share them. Do you have a person or event you would like us to share this month? Send your story to socialmedia@cooperhealth.edu.