PAFA is offering a multi-week virtual class starting next week.  Class description and free link below; registration gets full admission to all three talks, though of course you can choose which ones to attend or not. 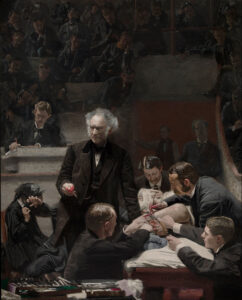 Thomas Eakins and the World’s Fairs

Thursdays on June 10, 17, and 24 from 5:30 to 7:30 PM
Zoom address will be emailed upon registration
Free for Medical School Partners

Thomas Eakins’ two medical masterpieces, The Gross Clinic and The Agnew Clinic were both displayed at the 1893 World’s Columbian Exposition. This lecture series with Dr. Paul Sivitiz examines Eakins’ use of a long-standing genre which he “modernized” (and the reason why The Gross Clinic was so off-putting to viewers at the 1876 World’s Fair). We will also explore if Eakins’ participation (essentially virtual, of course) in the Chicago World’s Fair contributed to the racial inequality promoted by the fair’s organizers.

The Gross Clinic was part of a tradition of medical painting and illustration dating back several hundred years. This lecture explores how Thomas Eakins not only continued in that tradition, but also expanded its possibilities.

Week 3: Eakins and the World’s Fairs

World’s Fairs in America during the late-nineteenth and early-twentieth centuries could best be described as “edutainment.” Fair organizers overtly promoted racial inequality, and the Eakins Clinic paintings helped undergird this strategy.