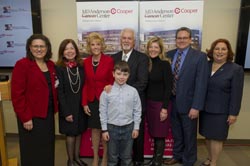 The grant is the largest to MD Anderson Cancer Center at Cooper since it opened in 2013.

“With this grant we are taking a major step forward toward our goal of conquering cancer,” said Norcross. “I am deeply appreciative of the William G. Rohrer Charitable Foundation’s support for MD Anderson Cooper and for sharing our commitment to bringing the best possible cancer care to patients across the region.”

“This grant is a reflection of my family’s longstanding love of Cooper and our great admiration for the life-saving care and research that takes place here each and every day,” said Rohrer, who was born at Cooper and served on the Cooper Board of Trustees. “The cancer genetics program at MD Anderson Cooper represents the future of cancer care, and my dad would want to be a part of it.”

Rohrer’s father, the late William G. Rohrer, also served on the Cooper Board of Trustees and was mayor of Haddon Township for 36 years. The cancer genetics program will officially be named the William G. Rohrer Cancer Genetics Program in his honor.

The program provides genetic counseling, testing and long-term cancer risk reduction strategies for people at increased risk for cancer due to hereditary mutations. The program also focuses on the evolving use of molecular profiling to define cancer treatment.

“Cancer is a genetically driven disease,” said Grana. “Genetic variation in healthy individuals may predispose them to developing certain cancers, and genetic alterations in the cancer cells themselves determine prognosis and response to anti-cancer drugs. Until recently, certain types of cancer, such as breast and lung, were largely treated the same irrespective of their genetic make-up.

“The funding from this generous grant allows us to expand our cancer genetics program to provide testing and counseling to more patients and enables patients to receive personalized medicine regimens of new drugs to target their tumor based on its genomic sequencing.”

The program will be expanded in phases and will include:

“The William G. Rohrer Cancer Genetics Program is an extension of our mission to serve, to heal and to educate,” said Kirby. “As the leading provider of comprehensive health services in South Jersey, we accomplish this mission through innovative and effective systems of care and by bringing people and resources together, creating value for our patients and the community.”

Kirby thanked the William G. Rohrer Charitable Foundation for the grant and recognized the leadership of Levin and The Cooper Foundation in securing the funding.

“The Cooper Foundation is honored to work with the William G. Rohrer Charitable Foundation, whose generosity is helping us make cancer history,” Levin said. “Support for the cancer genetics program means we can provide more patients with better options for the prevention, diagnosis and treatment of the disease and move one step closer to ending the disease.”