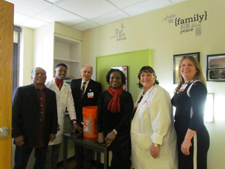 Every year for the past 11 years, Melvin Sheppard of Moorestown, NJ, visits the Children’s Regional Hospital at Cooper’s Neonatal Intensive Care Unit with a special mission. Sheppard, now 18, was born nine weeks premature at Cooper in 1997 weighing only 2.9 pounds. As a token of thanks and gratitude for the medical care he received as a premature infant, the Moorestown, NJ, teenager conducts a year-long penny collection and donates the proceeds to the hospital. Since he began his Pennies for Preemies campaign, Melvin has collected and donated more than $2,500 as a way of giving back and helping other premature babies get a good start in life. Donations have been used to purchase specialized equipment for the unit.