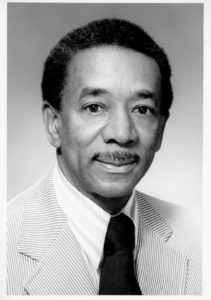 In 1950, Dr. Bascom Waugh became the first African American doctor to join the medical staff at Cooper. A World War II veteran, Dr. Waugh was a former flight surgeon for the 332nd Fighter Group, the legendary Tuskegee Airmen. According to a 2007 Air Force School of Medicine report, Dr. Waugh was one of the first two African American doctors to be trained alongside Caucasian physicians in the Army’s School of Aviation near San Antonio. He joined seventeen other African American flight surgeons supporting the approximately one thousand Tuskegee-trained pilots, and he was one of only six who served in combat during the war. When he returned from the war in 1946, Dr. Waugh opened a family medicine practice in Camden, where he worked until he died in 1992.

“My father was the kind of person who got up early every day, did his exercises, got dressed, and went to work,” Dyann Waugh, Dr. Waugh’s daughter, once told a local newspaper reporter. “He didn’t talk about himself… he was a very humble person.” Waugh, who became a doctor like her father, remembers him saying, “Kid, you got to treat people the way you’d like to be treated.”