As we begin the slow process of resuming the social rituals we had abandoned like taking a red eye for a medical conference, going to weddings, and all the small interactions we take for granted. Recovering doesn’t mean you go back to the way you were before using kintsugi, the Japanese technique of repairing broken pottery with gold, as an analogy for coming out of hard times with awareness of the change, and stronger than before. It’s that you create a new normal, one that’s functional and beautiful — and different. 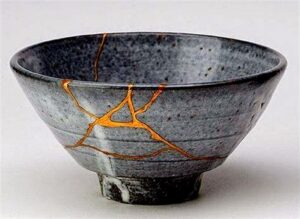 Kintsugi is the Japanese art of repairing broken pottery by mending the areas of breakage with lacquer dusted or mixed with powdered gold. As a philosophy, it treats breakage and repair as part of the history of an object, rather than something to disguise.

Send your questions, thoughts, and ideas.