As South Jersey’s only Level I trauma center—and one of only three in the entire state—Cooper University Hospital is uniquely qualified to provide the most advanced care for critically injured patients at any time of day.

Because demand for around-the clock emergency surgical care  has grown in this region, it was natural for Cooper to respond by leveraging its expertise to create a formal Acute Care Surgery program. An evolving specialty with three essential components—trauma, critical care, and emergency surgery— Cooper’s program is the first of its kind in South Jersey.

“Just about every other community hospital has a general surgeon, but at 2 a.m. that surgeon is most likely on call and home in bed,” he says. “And so are the anesthesiologist and OR nurse.

“So if a patient goes to that hospital in the middle of the night with appendicitis or cholecystitis, the emergency department will admit the patient, then call the general surgeon who probably sees the patient in the morning,” he continues.

“But here at Cooper, we have a general surgeon who’s also a trauma surgeon—along with anesthesiologists, nurses, and vital support services—and they’re in the hospital 24/7,” Dr. Porter says. “So when a patient comes in at 2 a.m., they’re seen by a general surgeon at 2 a.m.

“It translates into better decision making in a more timely fashion,” he adds. “It also speeds the time to diagnosis and results in better outcomes.”

Tracey McSweeney, 38, from Audubon, New Jersey, is a recent case in point. After months of worsening abdominal pain, tenderness, and weight loss, she experienced an acute episode that sent her to her local emergency room in fear that her appendix had burst. A CT-scan showed some inflammation in her lower intestine, so she was started on an antibiotic and a steroid and sent home with the recommendation to follow-up with a gastroenterologist.

She did so and began a diagnostic workup that included a colonoscopy—which was negative. The next step was to undergo an MRI. The day after her colonoscopy, however, McSweeney had what she characterized as “the worst, most severe pain I’d ever had.

“I made it through the night but didn’t sleep, then my husband drove me to the ER at Cooper the next morning,” she continues. Imaging revealed an enlarged, inflamed gallbladder—acute cholecystitis.

She was admitted right away and underwent a laparoscopic cholecystectomy, although she notes, “the surgeon had to make one of my incisions a bit larger than normal since my gallbladder was so big.”

She was home within 48 hours and gives the Acute Care Surgery team high marks for the care she received.

“The surgeon, anesthesiologist, and nurses all took time to talk to me and my family and really listened to my symptoms and issues,” she says. “They were very forthcoming about what to expect.”

“Cooper is uniquely positioned to be that partner,” he adds. 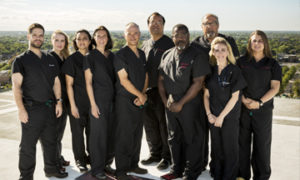 “Each member of our Acute Care Surgery team does three things: trauma, critical care, and emergency surgery,” Dr. Porter says. “So we provide what’s essentially ‘one-stop shopping’ when, for example, the ED at a community hospital has a critically ill patient who needs emergency surgery for peritonitis or diverticulitis, or if a surgeon has operated on a patient with complex issues and their hospital simply doesn’t have the critical-care resources to manage that patient postoperatively.”

To facilitate access to this level of care, Cooper offers a streamlined, around-the-clock transfer service.

“If a community hospital ER has a patient they feel needs more advanced care, one call to us and we’ll make it happen, regardless of time of day,” Dr. Porter says.

“In an emergency, you don’t want to make five phone calls to get a patient taken care of,” he adds. “One call to us and we’ll make it happen. And we pledge to not say no to any transfer.

The Cooper Transfer Center can be reached 24/7 at 855.CUH.XFER (855.284.9337). The transfer requires physician-to-physician consultation, which the Transfer Center initiates.