Last November, Cooper became the first health care facility in the eastern United States—and one of only 24 in the entire nation—to offer a newly FDA-approved device for patients with central sleep apnea (CSA). Called the remedē® (sounds like remedy) sleep system from Respicardia®, Inc., the implantable device treats CSA by activating the nerve that sends signals to the diaphragm to stimulate breathing.

“Unlike the more common obstructive sleep apnea, in which breathing disruptions are caused by upper airway obstruction, central sleep apnea occurs when the brain fails to send signals to the diaphragm, triggering lapses in breathing that can last from a few seconds to minutes,” explains John A. Andriulli, DO, FACC, electrophysiologist and Director of the Arrhythmia Device Program at Cooper University Health Care.

This can lead to poor sleep and raise a patient’s risk of health problems, including hypertension, myocardial infarction, stroke, obesity, and diabetes.

Before remedē was FDA clearedfor use, the primary treatment option for CSA was adaptive Servo ventilation (ASV), a type of positive airway pressure that continuously monitors a patient’s breathing. However, this option is not specifically tailored for treating CSA; rather, it is used in adults who have either CSA or obstructive sleep apnea.

The remedē device—for which Cooper served as a study site for the initial investigational device exemption (IDE) trial— gives CSA patients a better option tailored to their specific disorder, especially those with congestive heart failure.

“It’s like a pacemaker in that it’s implanted in the chest with several leads that pace the phrenic nerve and monitor a person’s lung function during sleep,” Dr. Andriulli says. Implantation is a simple outpatient procedure.

“Clinical testing showed that patients with central sleep apnea had a 50 percent or better reduction of apnea during sleep using remedē,” he continues, noting that this compared to an 11 percent reduct ion among those who didn’t have the system implanted. “Two other secondary endpoints were improved quality of life and improved sleep,” he adds. 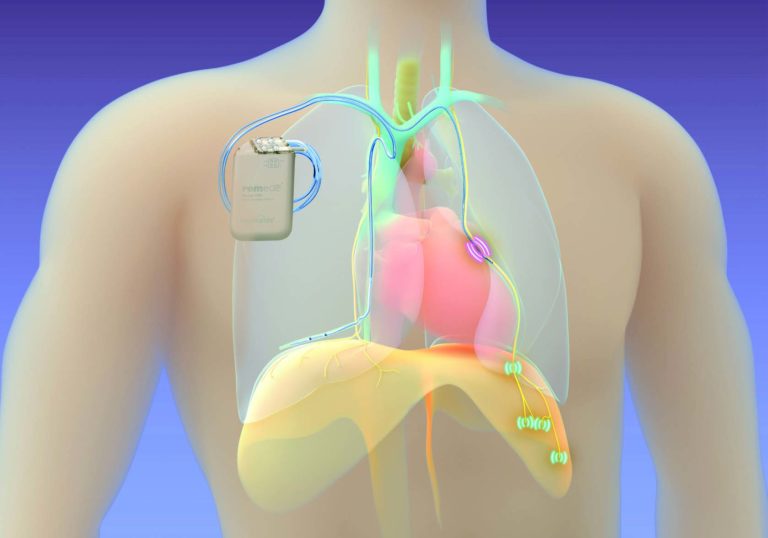 The remede® system is a battery powered device placed under the skin in the upper chest
area with two small thin wires (leads), one to deliver the therapy (stimulation lead) and one
to sense breathing (sensing lead). This system continuously and automatically monitors and
stabilizes the breathing pattern, restoring sleep throughout the night.

Dr. Andriulli also points out that patients in the trial who had heart failure demonstrated a 5 percent improvement in ejection fraction and, at six months post-implantation, a reduction in hospital admissions related to heart failure.

“The study wasn’t designed to study these secondary endpoints, however, so there is another ongoing study to validate these further,” he adds.

If you have a patient who you think may benefit from the remedē sleep system, the first step is to order a sleep study to demonstrate that central sleep apnea is the culprit.

“Many patients have mixed obstructive sleep apnea and central sleep apnea,” Dr. Andriulli says. “But in order for the remedē device to be indicated, the patient must predominantly have CSA.

“Once that’s confirmed, the patient can be referred to Cooper, where pulmonologist Ramya Lotano, MD, FCCP, a sleep expert, will validate the findings, then refer the patient to me for implantation,” he continues.

“Now that we can offer a treatment that’s been proven beneficial for patients with central sleep apnea, I urge my colleagues to be more aggressive about screening for this sleep disorder—particularly among their patients with congestive heart failure,” he adds.