Cooper University Health Care has formed a community-focused partnership with the Philadelphia 76ers and Cooper is now an official sponsor of the team.

Since opening their training facility in Camden, the 76ers have shared Cooper’s commitment to serving the community. As part of our unique partnership, Cooper and the 76ers will collaborate on a variety of activities and initiatives designed to positively impact Camden youth and bring meaningful change to the community.

The press release below provides additional details about this exciting partnership and how it will impact Camden residents. 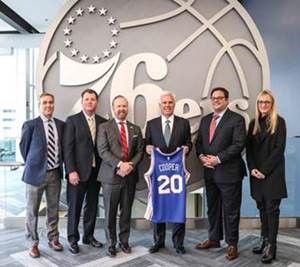 “Community engagement is one of our core values and we’re thrilled that this partnership with Cooper University Health Care will create new avenues to positively impact youth in the City of Camden,” Philadelphia 76ers President Chris Heck said. “Basketball has the power to bring people together and drive meaningful growth and change in our communities. Together with the team at Cooper, we look forward to doing just that.”

“Cooper has called Camden home for more than 130 years and has been its residents’ trusted health care provider,” said George E. Norcross III, Chairman of Cooper’s Board of Trustees. “Since moving to Camden, the 76ers organization has embraced the community, making them an ideal partner to serve the residents and add to the city’s quality of life.”

“At the heart of this partnership is a commitment to Camden that Cooper and the Sixers share, and we see this collaboration as an extension of our common mission to serve the residents of our community,” said Kevin O’Dowd, JD, Co-President/CEO of Cooper.

“Together, Cooper and the Sixers have designed this partnership to impact the lives of young people in Camden with new recreational opportunities, facilities, and healthy lifestyle education,” said Anthony J. Mazzarelli, MD, JD, MBE, Co-President/CEO of Cooper.

As part of the unique partnership, Cooper and the 76ers will collaborate on a variety of community-based activities and initiatives:

The 76ers and Cooper will host a three-day Camden Youth Basketball Clinic this summer, featuring more than 900 Camden-area youth (dates, times and location to be announced). In addition to basketball skills training and development, the clinic will include programming focused on physical fitness, nutrition and overall wellness.

Later in 2020, the 76ers and Cooper will renovate a Camden basketball court for youth in the city. This will be the second court that the 76ers have refurbished in Camden in the last year as the organization transformed Cooper’s Poynt’s basketball courts in September 2019.

Employees from both the 76ers and Cooper will also volunteer through a “Project 76 Day of Service” project in Camden. The effort is part of the Philadelphia 76ers “Project 76” employee volunteer initiative, through which all 76ers employees are encouraged to pledge at least 76 hours of community service annually to support communities where 76ers fans live, work and play. The result of the organization’s efforts annually equates to more than 10,000 volunteer hours.

Continuing their Camden community outreach, the 76ers and Cooper will create a Health & Nutrition Seminar for Camden-area youth. The youth will hear from 76ers and Cooper nutritional professionals on best practices and have an opportunity to take the court at the Philadelphia 76ers Training Complex.