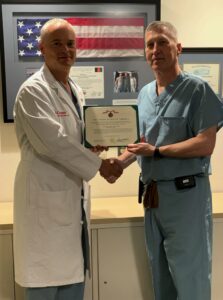 In early 2019, Cooper became the first health system in the nation to enter into an agreement with the U.S. Army to provide advanced surgical trauma training to the elite Forward Resuscitation Surgical Team (FRST) through the AMCT3 program.

As the leading academic health system, Cooper is the only Level I Trauma Center for all of southern New Jersey and is one of the busiest trauma centers in the region. Due to its high-volume trauma center and expertise in surgery and critical care, Cooper provides a wide range of military, diplomatic, and field affairs training programs.

“I am humbled and honored,” said Dr. Chovanes. “We have an amazing team. Go, Army, and go, Cooper!”