The Camden Higher Education and Healthcare Task Force released market research that demonstrates demand exists for new and refurbished housing convenient to Camden workplaces and schools among the Task Force’s nine anchor institutions’ employees, medical professionals, and students. The survey of the employees and students of nine major employers and schools in the City of Camden was conducted this summer. 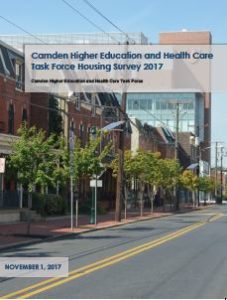 “Camden’s Eds and Meds have traditionally served as the city’s economic engine and a source of health and educational opportunity for the region. As major infusions of new development have worked to diversify the local economy, we look to support this dynamic growth by demonstrating the market for new housing,” said Task Force Chair Louis S. Bezich, Senior Vice President of Strategic Alliances at Cooper University Health Care.

Highlights of the study include:

A total of 1,258 individuals participated in the survey. Cooper University Health Care, the city’s largest employer, represented over 600, followed by Rutgers University–Camden with slightly over 250.

“Cooper has always viewed housing as an integral part of our commitment to Camden’s rebirth and a social determinant of health. Over the last decade, Cooper, along with our community partners, has spurred the construction and rehabilitation of more than 250 units in the Cooper Plaza neighborhood, and we continue to offer assistance to employees who want to own a home in this neighborhood and live where they work,” said Adrienne Kirby, President and CEO of Cooper University Health Care.

Phoebe Haddon, Chancellor of Rutgers University–Camden, voiced similar support for housing in the city. ”We’re increasingly seeing students who want the experience of an urban lifestyle. New and redeveloped housing and the amenities that it can support are the building blocks of a vibrant environment that can complement what’s already underway.”

“Our Eds and Meds have worked hard to employ many Camden residents only to see them move to the suburbs as soon as they could afford to. People who work in the city need more housing choices and the ability to upgrade without leaving the city,” said Redd

“Camden residents want quality housing. This study documents this demand among those employed in the city and the lack of housing stock for those looking to get ahead,” said Moran.

The survey also demonstrated a consensus that the city has improved over the past decade and that its progress is expected to continue over the next 10 years. Camden County Freeholder-Director Louis Cappelli Jr. saw this as a by-product of the county’s focus on Camden’s revitalization and the new Camden County Police Force.

“While we continue to witness more development and growth in Camden, it is clear that if you work in the city for any period of time you will want to put down roots here,” said Cappelli. “This is a continuing trend in the Eds and Meds corridor provided through quantitative research that is sparking new residential development downtown. You only need to visit the Pierre building on Cooper Street to see a shuttered building being turned into 35 new market-rate apartments, or for that matter, walk through the Cooper Plaza neighborhood to see the significant changes to the vacant lots and abandoned buildings. While we continue to witness unprecedented growth occur in the city this study speaks directly to the excellent opportunity we have to retain the talented and innovative employees working inside this corridor. We want employees to live where they work and continue to be part of the transformation in Camden and the county.”