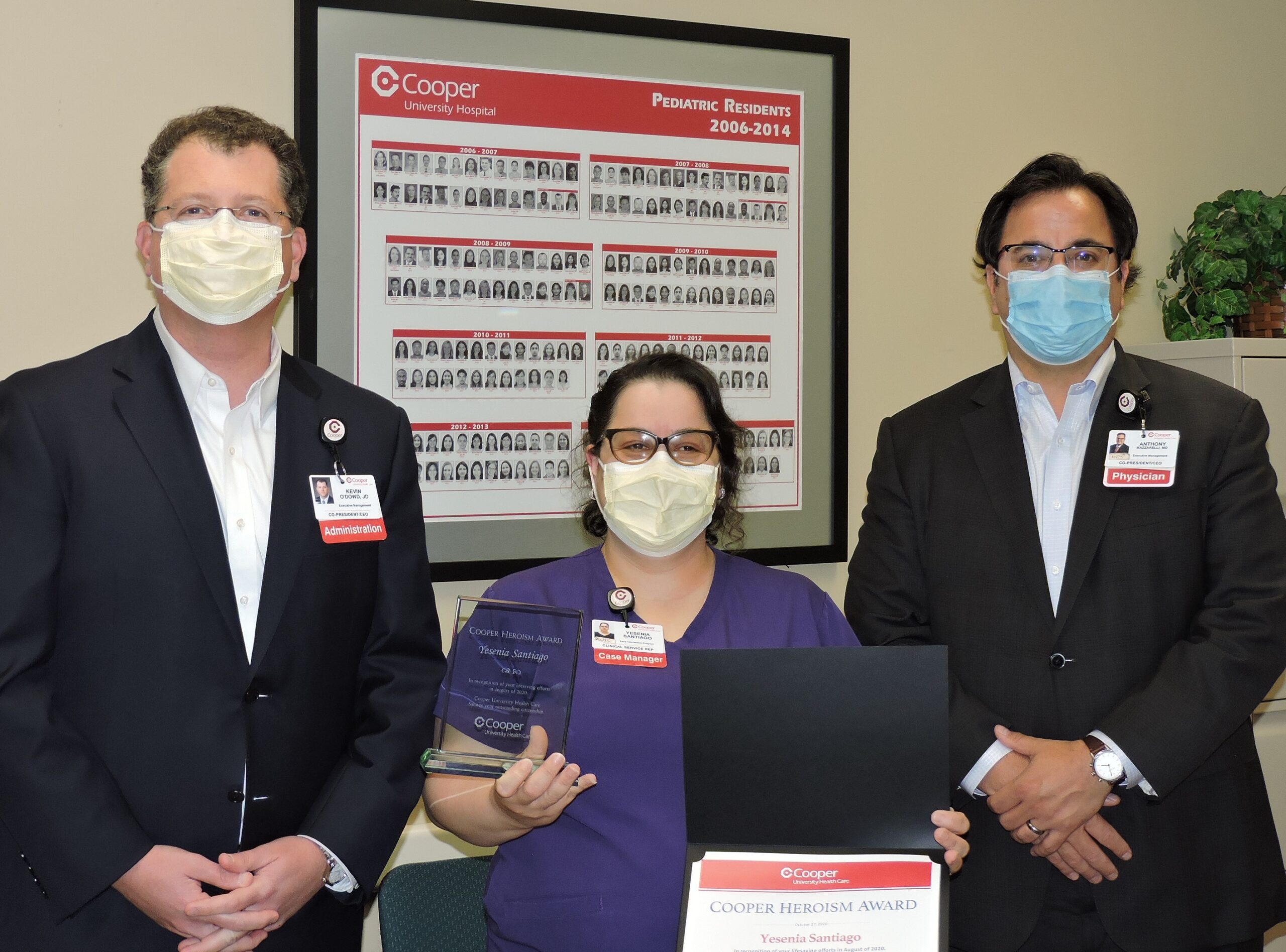 Yesenia “Yesi´ Santiago, a non-medical case manager for Cooper University Health Care’s Early Intervention Program (EIP), was honored with the Cooper Heroism Award for saving a man’s life in the community during the summer. Cooper Co-CEOs Kevin O’Dowd and Anthony Mazzarelli presented the award to Yesi during a recent ceremony.

“Cooper is fortunate and proud to have caring, committed employees like Yesi who go over and above for their fellow citizens,” said O’Dowd.

“We commend Yesi for her selflessness and quick thinking, which saved a man’s life,” said Mazzarelli.

The event took place in August, when Yesi was driving through Camden and noticed an unresponsive man lying on the ground near a park. Two other citizens were shouting for help when Yesi stopped to assist. She felt for the man’s pulse which was barely palpable and noticed the man was not breathing. One of the bystanders left but the other stayed when Yesi told him she needed his help to perform CPR.

Yesi looked up CPR on YouTube because it had been a couple of years since she was last certified, and she wanted to make sure she did it right. As she was watching the video, she started performing chest compressions as the other citizen called 911.

While waiting for EMTs, another citizen arrived and administered Narcan. The man’s color slowly returned with the chest compressions, and he briefly regained consciousness. Yesi stayed with the man until EMTs arrived and she was able to report all the events. Yesi says the man had fully regained consciousness and was breathing on his own when he left in the ambulance. Yesi says that she knew this man would die if she did not stop and try to help.

Yesi has been a Cooper employee for 22 years and with its EIP since 2005. Yesi works as the Housing Ambassador for Cooper’s state-funded, non-medical case management services helping to prevent homelessness and help homeless patients get access to housing services. Yesi has lived in Camden most of her life, and this is not the first time she has stopped to help a fellow citizen in need.

Cooper established the Cooper Heroism Award in 2019 to honor employees who have demonstrated heroic efforts in the community. The first Cooper Heroism award was presented to John Bishop who jumped from his car to rescue a woman from an attacker alongside Route 73 in Mt. Laurel, NJ in August 2019.  Earlier this year, Cooper presented its second Heroism Award to advanced practice nurse Entela “Annie” Ahmeti who revived a man who had stopped breathing while working out at a local gym. Thanks to Ahmeti’s efforts, the man made a full recovery.