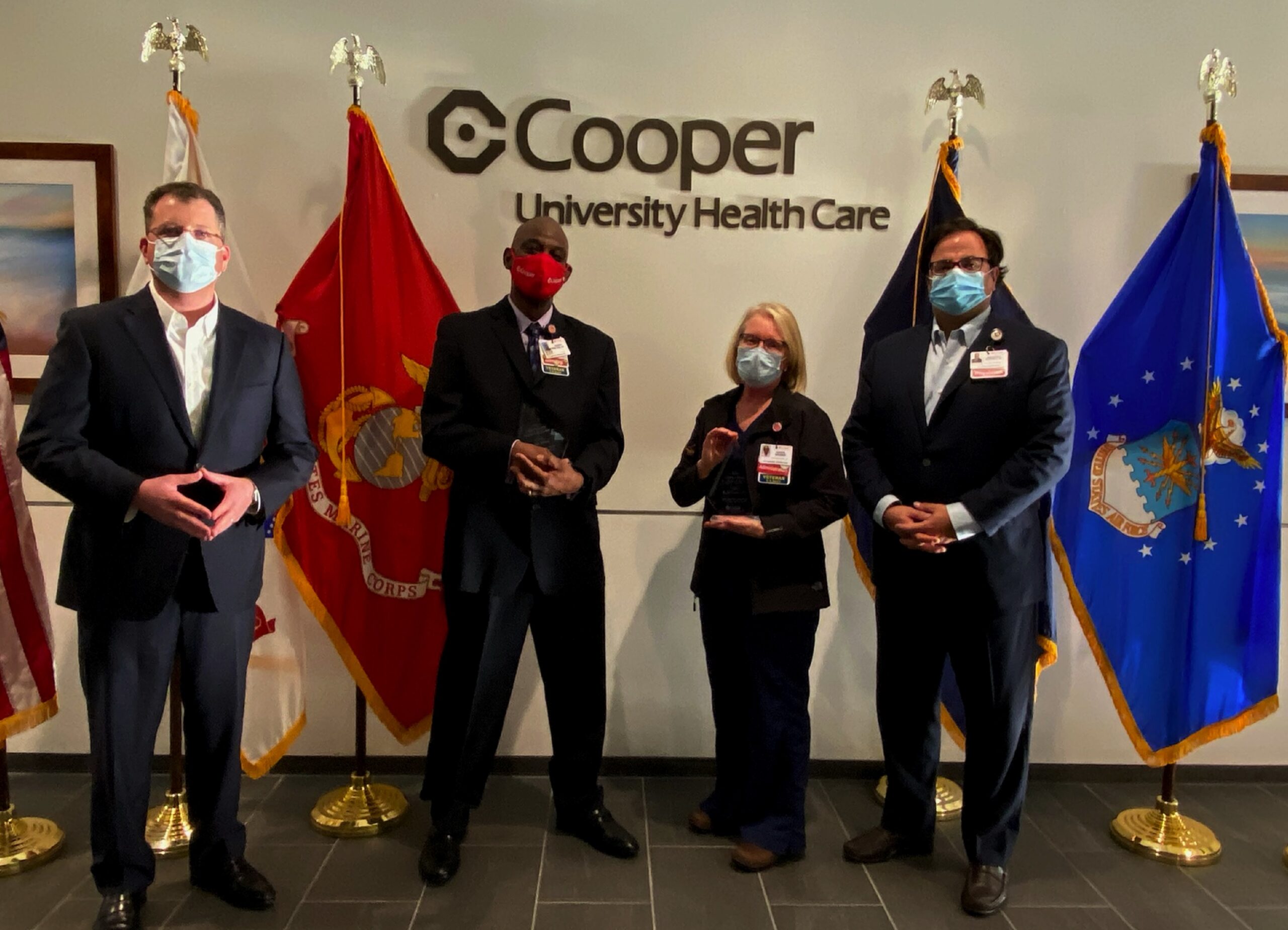 The Cooper Military Employee of the Year Award was established in 2018 to formally recognize the outstanding contributions Cooper team members have made to the health system, the community, and the nation, as well as in support of Cooper’s mission: To serve. To heal. To educate.

“Cooper is committed to serving members of the military with a number of initiatives coordinated by a dedicated Military, Diplomatic, and Field Affairs program and our commitment extends to acknowledging and honoring members of our own Cooper military family, such as Joseph Milton and Karen Gruber, who continue to serve our communities,” said Kevin O’Dowd, JD, Co-President/CEO of Cooper.

“Cooper is also one of the leading health systems in the nation in providing training to military medical personnel, and each Veterans Day we are proud to honor outstanding colleagues like Joseph Milton and Karen Gruber, who continue to lead by serving others,” said Anthony J. Mazzarelli, MD, JD, MBE, Co-President/CEO of Cooper University Health Care.

Gruber, a United States Navy veteran and 31-year Cooper employee, currently serves as AVP of Nursing Operations. Throughout the pandemic, she has been very active in the COVID-19 Regional Command Center and in working with the team in establishing the field base to care for COVID-19 patients during the pandemic. She also has led numerous initiatives aimed at improving health care access, health screenings, and COVID-19 testing sites. She is also an active member of the New Jersey Hospital Association Organization of Nurse Leaders.

Milton also is a US Navy veteran and a 30-year employee of Cooper. In addition to his daily responsibilities as an orthopedic technician, he has worked closely with Cooper’s Military, Diplomatic and Field Affairs Program, especially in helping visiting military and state department trainees properly integrate into the orthopedic department during their training. He is active in his church where he serves as a deacon.

In 2019, Cooper honored advanced practice nurse Ella Hawk, a member of the hospital’s cardiothoracic surgery team, who has been a member of the United States Navy Reserves since 2013. As a Navy nurse, she has served in a variety of leadership capacities.

Due to its expertise in trauma, surgery, and critical care, Cooper provides a wide range of military, diplomatic, and field affairs training programs. Last year, Cooper became the third location in the nation to provide specialized medical training to active duty and reserve personnel from all branches U.S. military as part of Operation SMART (Strategic Medical Asset Readiness Training).  Operation SMART was developed by the U.S. Army Medical Command as part of an effort to establish a national network of civilian health care facilities to train and build medical skill sustainment among military personnel.

In January 2019, Cooper was the first health system in the nation to enter into an agreement with the U.S. Army to provide advanced surgical trauma training to the elite Forward Resuscitation Surgical Team (FRST) through the Army Medical Department Military-Civilian Trauma Team Training (AMCT3) Program. Cooper is also the only hospital in the United States that has trained elite medical providers from every military branch, multiple local, state, and federal government agencies, and international partners.