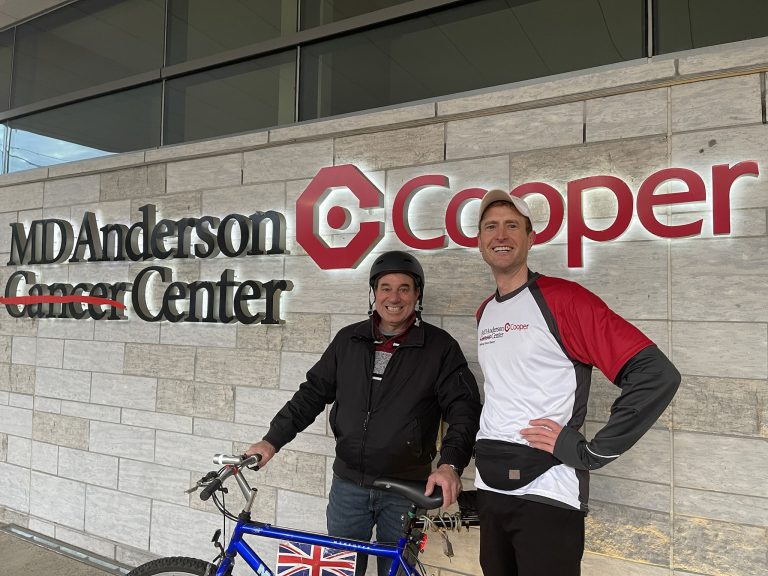 On Monday, December 13, Vincent Zoppina joined his radiation oncologist, Gregory J. Kubicek, MD, on the Philadelphia side of the Ben Franklin Bridge to make the 2.5 mile trip to MD Anderson Cancer Center at Cooper in Camden for his last treatment for esophageal cancer. The trip was Vince’s idea to celebrate completing five weeks of chemotherapy and six weeks of radiation therapy.

Waiting for their arrival at MD Anderson at Cooper – Vince by bike with Dr. Kubicek running beside him – were Vince’s family and friends, including his wife, Michelle, a breast cancer survivor and also a former patient of Dr. Kubicek. They gathered together holding signs and their cell phones to capture the moment he came into view.

Vince’s first words to the awaiting crowd: “We made it.”

When his treatment was over, Vince shared this moving speech with the crowd:

“When my wife, Michelle, rang this bell four years ago, I never could imagine that I, too, would have to ring this bell myself. She fought her battle with courage and strength, and set a fine example of what I needed to do. So when I was diagnosed with esophageal cancer, there was no doubt that MD Anderson [at Cooper] would be my choice for treatment. See, it takes a team to beat cancer, and when I say team, I don’t just mean the doctors. I mean everyone. From the radiation technicians, to the infusion nurses, to the girls who checked me in every day with a personal greeting. ‘Hi Mr. Zoppina, you’re all checked in. We’ll be right with you.’

“See, it’s all about the little things that make a difference. And that makes the cancer battle just a little bit easier. And with that I would like to thank all my family and friends for all of your support and prayers. I’m not sure what I would do without all of you. Thank you again everyone here at MD Anderson [at Cooper], especially my doctors, Dr. Kubicek, Dr. Morrison, and Dr. Shersher. Thank you for everything.”

Congratulations, Vince, and continued best wishes in health from all of us at Cooper! 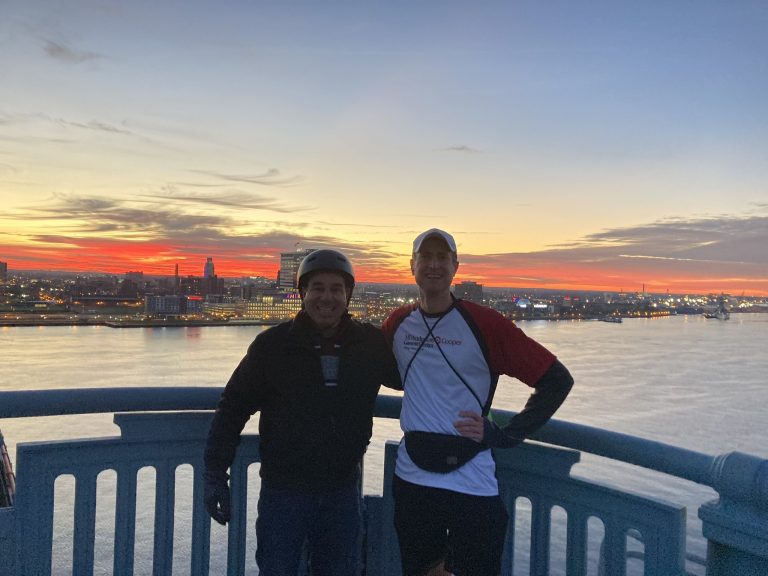 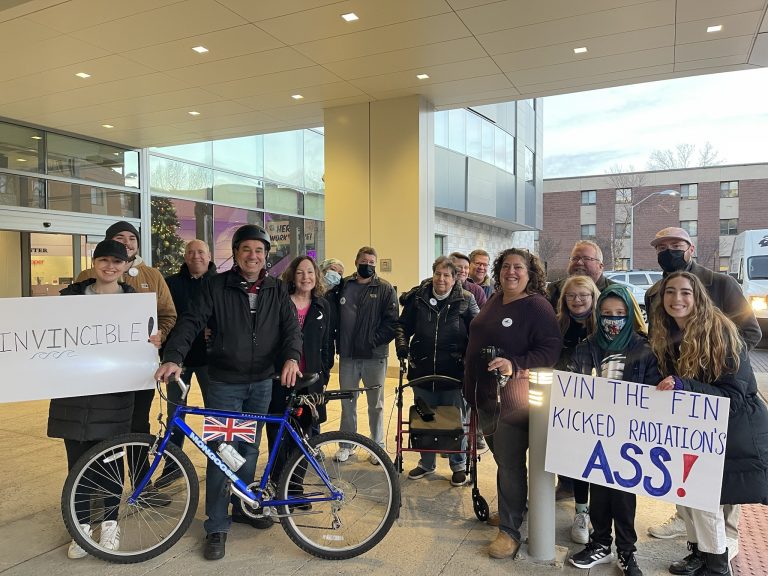 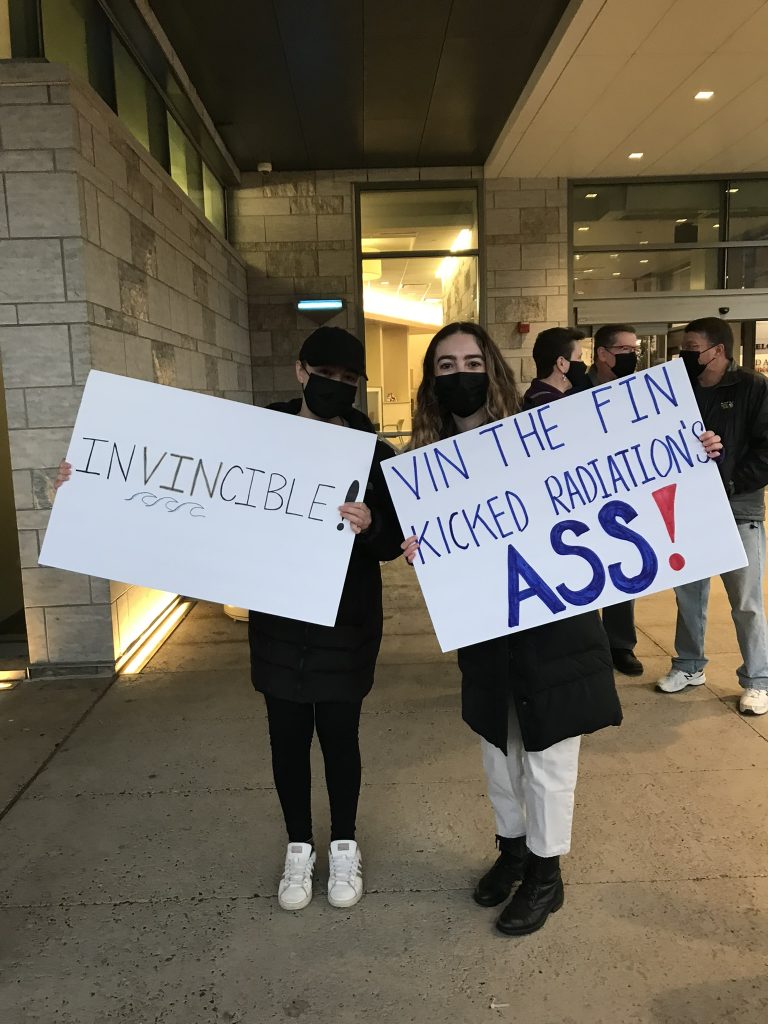 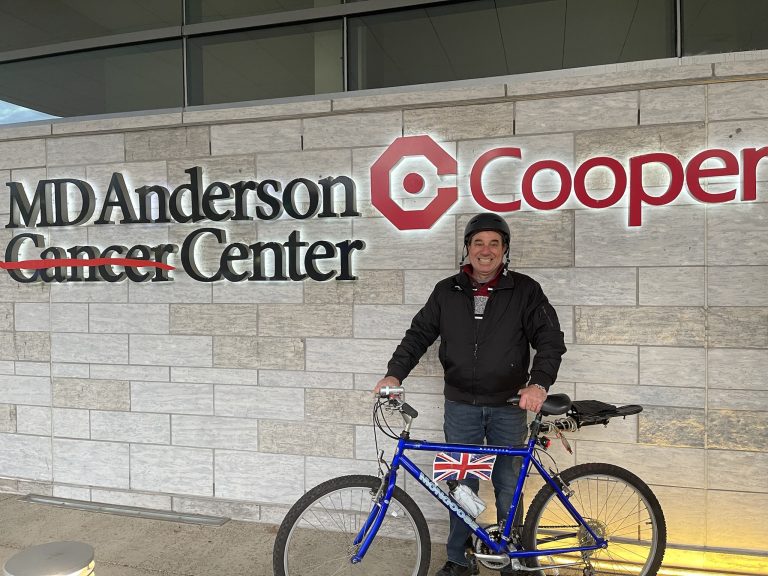