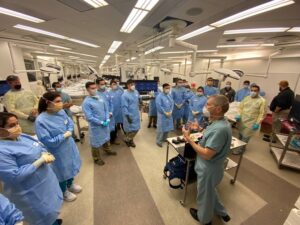 COL Kirby Gross, lead instructor for ASSET is preparing the learners for their first hands-on portion of lab 1. Learners in the above caption include Cooper Surgical Residents and Fellows, U.S. Army EMTs, LPNs, and OR Scrub Techs, and Cooper’s AMCT3 embedded team.

Developed by the American College of Surgeons and offered at trauma centers and medical schools around the nation, the program was brought to Cooper to expand the training curriculums provided by Cooper’s Military, Diplomatic, and Field Surgical Affairs department for both military trainees embedded at Cooper as well as Cooper’s own medical residents, fellows, and students. 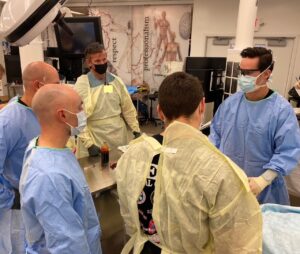 “Our goal is to continue to expand the military-civilian partnership to provide top-line trauma readiness training for everyone – from our Army doctors, Special Operations Medics, civilian first-responders as well as those in the learning communities,” said Colonel Kirby R. Gross, MD, FACS, an Army trauma surgeon currently assigned to the Division of Trauma in the Section of Military, Diplomatic, and Field Surgical Affairs at Cooper, who served as the ASSET program course co-director with Colonel John Chovanes, DO, FACS.

“By expanding our program to provide ASSET training, we are demonstrating Cooper’s commitment to provide the highest level of education to both our military and civilian audiences,” said, John Chovanes, DO, FACS, COL, MC, USAR, a trauma surgeon at Cooper and the founding medical director of Cooper’s Section of Military, Diplomatic, and Field Affairs.

Currently offered as an intensive one-day survey class, the program will eventually expand to a two-day offering and will include modules in pre-hospital care. Two additional ASSET courses are planned for 2022.