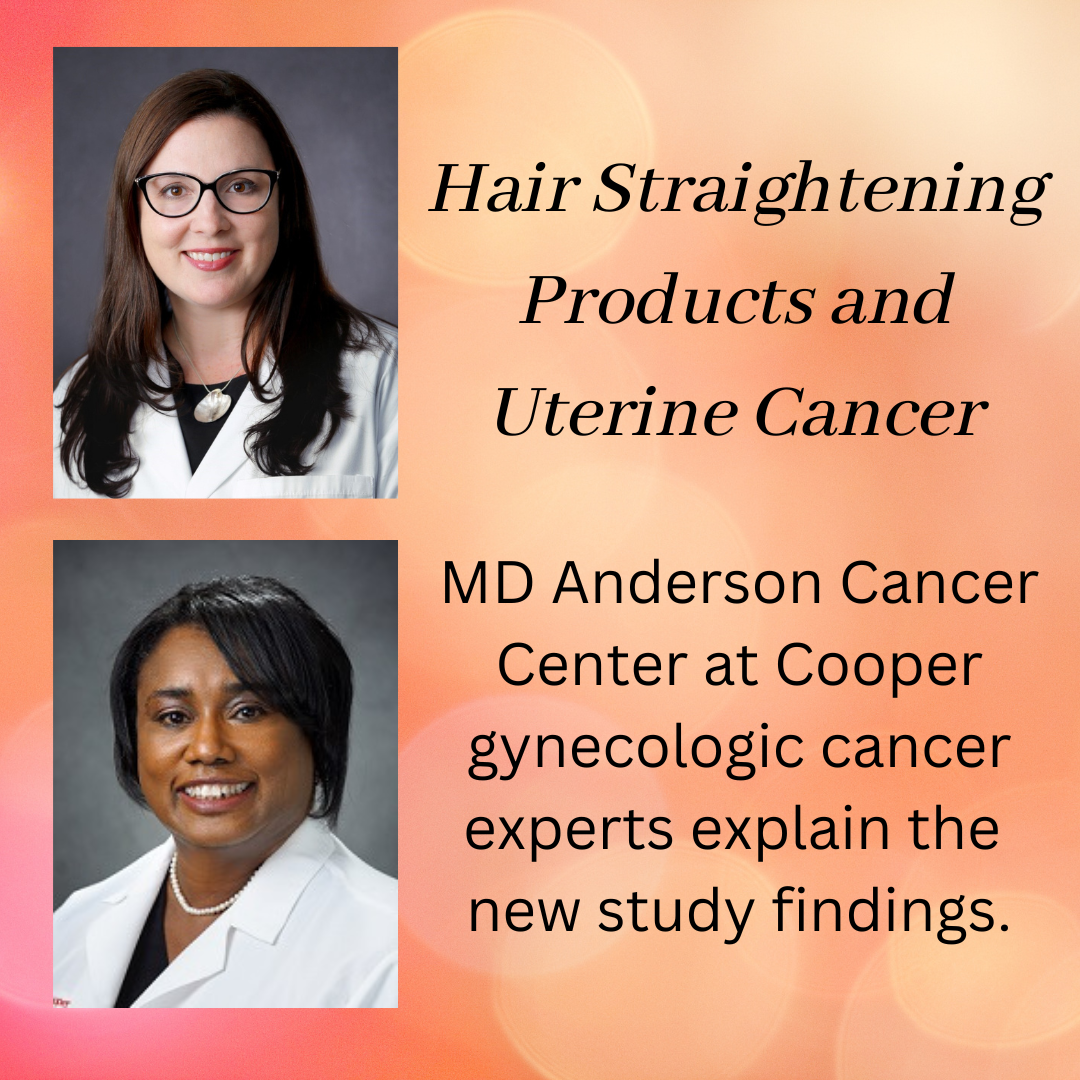 A new study (known as the Sister Study) released by the researchers at the National Institutes of Health finds that women who used chemical hair straightening products were at higher risk for uterine (endometrial) cancer compared to women who did not report using these products. The researchers found no associations with uterine cancer for other hair products that the women reported using, including hair dyes, bleach, highlights, or perms.

Two MD Anderson Cancer Center at Cooper gynecologic cancer experts helped us understand the study and interpret the findings. Here’s what they told us.

I think the study has validity and is very important work but should be interpreted carefully and in context.

The Sister Study is large prospective cohort study – which means the study looks for outcomes, such as the development of a disease, and examines exposure to certain factors under investigation. This type of study involves looking at a large group of study participants and watching them over a long period of time (10.9 years). In this study, 33,947 women who had a family history of cancer were included and 378 uterine cancer cases were identified.

The study was conducted by experts who determined that there seems to be an association between uterine (endometrial) cancer and chemical straightening products. The researchers found that women in the study who reported frequent use of hair straightening products were more likely to develop uterine cancer compared to those who did not use the products. It is important to note that the study findings do not prove that the products caused the cancer, but the results are still concerning.

Based on these results, creating awareness is critically important and further research is needed. People need to be empowered with the information to make their own decisions about certain hair products and what role they will have in their lives moving forward after considering the risk and benefits.

The authors also point out that 60% of study participants who used straighteners identified as African American/Black. While no differences were noted in the risk of uterine cancer between racial and ethnic groups in the study, the harmful health effects associated with straightener use could be more consequential and potentially underestimated in Black women.  We know the number of endometrial cancers is rising in the U.S., but particularly in Black and Latinx patients. Research also continues to show that these women have more aggressive cancers and higher mortality rates than others. There is a still much we don’t know about racial inequities in cancer and health care, but I think one important outcome of this study and its findings is that it is getting people to talk about these issues and promote awareness.

Everyone needs to know how to reduce their risk of uterine cancer (nutrition, physical activity, treatment for hormonal imbalances) and to know the symptoms of uterine cancer. The most common and early sign is abnormal bleeding. This includes any vaginal bleeding after menopause or sometimes heavier than usual periods in younger women. If this has happened to you, or if you are concerned about your risk of uterine cancer, talk to your doctor.

This was intriguing study, but as Dr. Krill says, it does not prove that hair straightening products cause uterine cancer, but they may increase a women’s risk.  More research needs to be done, taking into account racial disparities, environmental factors, risk factors, and access to health care. I would inform my patients about the research and discuss with them the possible impact on their risk.

Each year, more than 88,000 women in the US are diagnosed with gynecologic cancer.

Many women are unaware of the symptoms of gynecologic cancer. It is important to take the time to understand them and be able to recognize them if and when they occur. They include:

You should also see a doctor if you have any other warning signs that last for two weeks or longer and are not normal for you. Symptoms may be caused by something other than cancer, but the only way to know is to see a doctor.

My recommendations are to listen to your body, take action when something seems off, and take steps to reduce your risk of gynecologic cancers.

Here are my top five tips for gynecologic health: