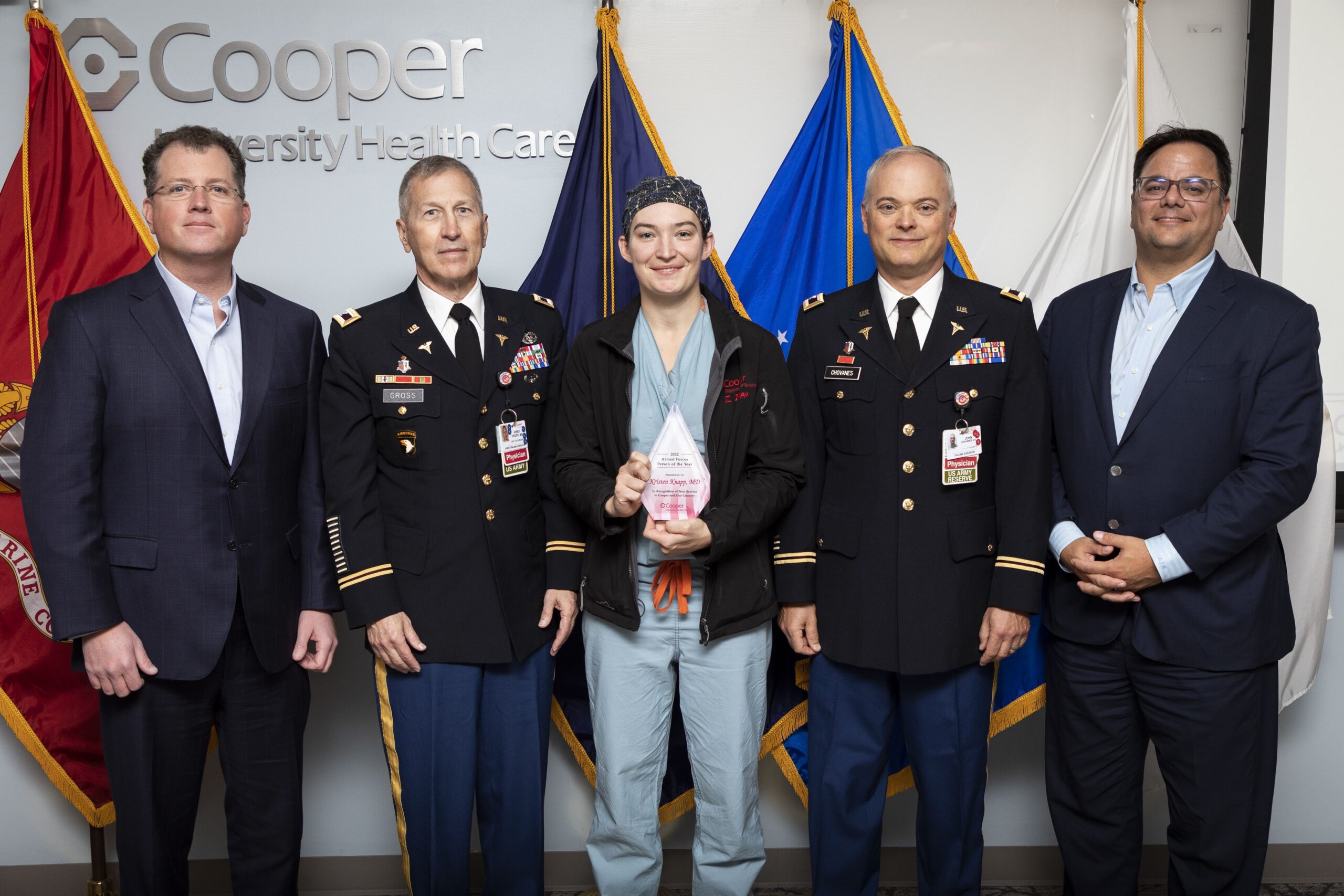 Cooper University Health Care has named Kristin Knapp, MD, a third-year general surgical resident and an officer in the U.S. Army Reserves, as the 2022 Cooper Armed Forces Person of the Year.

“Dr. Knapp is an inspiration and an outstanding leader who has made impressive contributions to Cooper, the community, and the nation through her service as a physician and as a military officer and is deserving of this recognition from her team members,” said Kevin O’Dowd, JD, co-CEO of Cooper.

“Completing a surgical residency while serving in the U.S. Army Reserves is already a formidable task, but Dr. Knapp goes above and beyond by volunteering as an educator in Cooper’s military training program while providing outstanding, compassionate care to our patients and their families,” said Anthony J. Mazzarelli, MD, JD, MBE, co-CEO of Cooper.

Dr. Knapp first came to Cooper while finishing medical school in 2019 as part of a visiting clerkship in Cooper’s Emergency Department. Following rotations in Cooper’s Level 1 Trauma Center, she pursued a residency in surgery and was eventually matched at Cooper, her first choice, through the National Residency Matching Program.

In September 2019, Dr. Knapp joined the U.S. Army Reserves and was commissioned in the rank of captain in August 2020. Since beginning her residency three years ago, she has made a positive impression on her team and peers at Cooper for outstanding service. Between her surgical residency program and other commitments, Dr. Knapp volunteers time to teach hemorrhage control and general surgical techniques to trainees from all branches of the military and other governmental agencies as part of the Military, Diplomatic, and Field Surgical Affairs program at Cooper. In her free time, Dr. Knapp is a martial arts practitioner, survivalist instructor, homesteader, and amateur beekeeper.

The Cooper Armed Forces Person of the Year Award was established in 2018 and is presented near Veterans Day each year. The award recognizes a Cooper team member who has made outstanding contributions to the health system, the community, and the nation in support of Cooper’s mission: To serve, to heal, to educate.

Cooper is the leading academic health system and the only Level I Trauma Center for all of southern New Jersey. The busiest trauma center in the region, Cooper is also the only hospital in the United States that has trained elite medical providers from every military branch; multiple local, state, and federal government agencies; and international partners through its military training program.

In March 2021, Lieutenant General R. Scott Dingle, The U.S. Army Surgeon General and Commanding General, U.S. Army Medical Command, visited Cooper and said: “Everyone said we had to come to Cooper because Cooper is the best, and that Cooper is setting the pace. Thank you for your support for the United States Army and the armed forces. You all are generating readiness for the soldiers who are saving lives in combat.”

For more information about how Cooper is committed to serving those who have served our country, visit https://www.cooperhealth.org/services/serving-our-military-and-veterans.