“The purpose of the lighting is to raise awareness about ovarian cancer,” said Generosa Grana, MD, FACP, director of the MD Anderson Cancer Center at Cooper.”

“The DRPA recognizes the outstanding work that MD Anderson Cancer Center at Cooper is doing regarding cancer prevention, diagnosis and treatment,” said John T. Hanson, CEO of the Delaware River Port Authority. “We are proud to help them spread awareness about gynecological cancers by turning the Ben Franklin Bridge Teal throughout the month of September.”

Ovarian cancer ranks fifth in cancer deaths among women. According to the American Cancer Society, an estimated 22,440 will receive a new diagnosis of ovarian cancer in 2017 in the United States, and approximately 14,080 women will die from the disease. This cancer mainly develops in older women, and about half of the women who are diagnosed with ovarian cancer are 63 years or older. It is more common in white women than African-American women.

The rate at which women are diagnosed with ovarian cancer has been slowly falling over the past 20 years. In most cases, ovarian cancer isn’t diagnosed until it has progressed to an advanced stage. In fact, according to the American Cancer Society, only about 20 percent of cases are diagnosed at an early stage. Typically, this is because ovarian cancer symptoms either aren’t apparent in the early stages of the disease or they mimic common stomach and digestive issues that are often mistaken for minor ailments. Women are more likely to experience symptoms once the disease has spread beyond the ovaries. 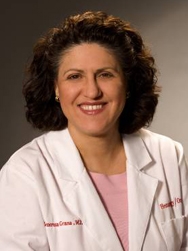 “It is important for women to know there is hope. MD Anderson Cooper is leading the way in awareness, detection and treatment right here in South Jersey,” said Dr. Grana. “MD Anderson Cooper’s Gynecologic Cancer Center is South Jersey’s largest and most experienced gynecologic cancer providers, providing women with advanced diagnosis and treatment of gynecologic cancer and precancerous conditions.”

Because, ovarian cancer is difficult to detect, especially, in the early, most treatable stages, regular gynecologic exams and listening to your body are the keys to early detection. The signs and symptoms of ovarian cancer have been described as vague or silent; they are often attributed to other conditions and ignored or left unexplored. These symptoms include: Pelvic or abdominal pain; trouble eating or feeling full quickly; and feeling the need to urinate urgently or often. Other symptoms of ovarian cancer can include fatigue, upset stomach or heartburn, back pain, pain during sex, constipation, or menstrual changes

Dr. Grana advises, “If symptoms persist for more than two weeks and do not resolve with normal interventions (like diet change, exercise, laxatives, rest) it is imperative to see your physician.”