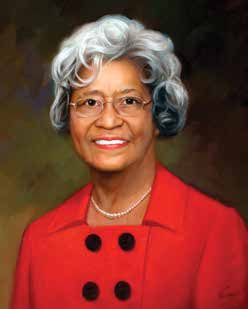 “I always believed in serving the community, and my service on the Cooper Board of Trustees is an extension of that belief. Cooper has undergone a significant transformation over the past several years, with the opening of the new medical school and the construction of the new cancer institute, and the future looks bright. I am proud to have the opportunity to be a part of it.”

Joan S. Davis spoke these words on June 6, 2013, the last public speech she ever gave. Wearing a suit that matched the colorful bouquet of flowers she held in her arms, Mrs. Davis was the guest of honor that day, surrounded by more than fifty community leaders who had gathered to dedicate Camden’s Seventh Street Park to her in honor of her longtime civic and community leadership. Nearly three weeks later, after a courageous three-year battle with lung cancer, she passed away on June 29 at the age of seventy-five.

A former educator and financial analyst, Mrs. Davis created a lasting legacy as a tireless community advocate and leader in Camden, a lifetime of service described on a beautiful plaque in the park that now bears her name. She held leadership positions at the Camden Public Library, CAMcare Health Corporation, Delaware River Port Authority, Home Port Alliance for the USS New Jersey, Cooper’s Ferry Development Corporation, and the Camden Redevelopment Agency. She served on Cooper’s Board of Trustees since 1994 and was the first woman to become Vice Chair, serving in that position from 2006 until she passed away.

“Joan was my partner throughout my leadership tenure at Cooper,” said Norcross [George E. Norcross III, current Chairman of the Cooper Board of Trustees]. “She believed passionately in the mission of Cooper, and she lived in the city until her passing. She was an anchor—not only for Cooper and our Board of Trustees but for an entire city.”

At Mrs. Davis’s memorial service, Norcross read the statements that Mrs. Davis had prepared to deliver on June 10, 2013, the day Cooper and MD Anderson Cancer Center publicly announced their partnership for a new cancer center. Her declining health, just three days after she attended the park dedication, prevented her from speaking at that press conference, but her poignant, inspiring, and selfless words will forever remain a powerful reminder of why MD Anderson Cancer Center at Cooper is so important.

“In July 2010, I was diagnosed with lung cancer. I am the eighth person in my family diagnosed with cancer,” she wrote. “Other members of my family did not have the opportunity to live as long as I have. I have received the best care at Cooper, and it’s the same care they provide the man or woman battling their own cancer in the chemo chair beside me. To me and to cancer patients throughout the region, this new partnership brings promise. I believe that this partnership will give families, like mine, more time, more memories, and more hope.”