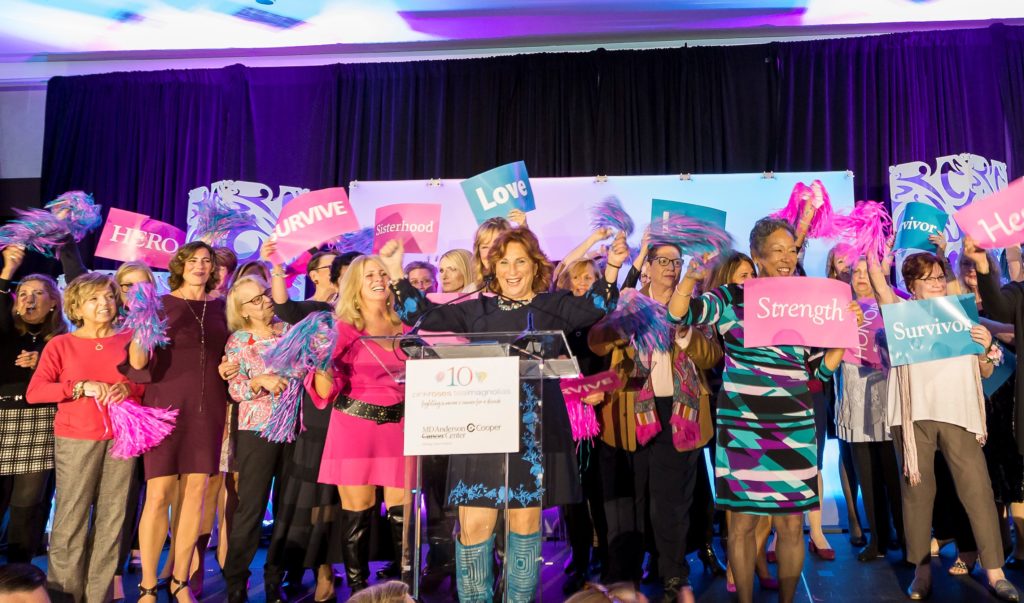 The 10th annual fundraiser was held on Sunday, October 27, 2019, at the Crowne Plaza in Cherry Hill, NJ. More than 850 people were in attendance. Pink Roses Teal Magnolias is the largest breast and gynecologic cancer fundraiser in the Delaware Valley.

“Pink Roses Teal Magnolias is a healing movement fueled by the power of hope and the strength of sisterhood that supports fellow survivors and advocates for research and care for breast and gynecologic cancer,” said Susan Bass Levin, who is also an ovarian cancer survivor. “To raise $1 million is a testament to the passion of the Pink and Teal community and their dedication to finding a cure for women’s cancer once and for all.”

Since the first brunch in 2010, fundraising for Pink Roses Teal Magnolias has totaled $6.5 million. Funds have been used to support research, the Patient In Need Fund, new technology, the Survivorship Program, and the Dr. Diane Barton Complementary Medicine Program which utilizes therapies designed to lessen the pain, stress, and anxiety associated with cancer while supporting mainstream medical care.

“Since opening in 2013, MD Anderson at Cooper has become the leading cancer center in South Jersey, caring for more than 100,000 patients each year,” said George E. Norcross III, Chairman of Cooper University Health Care. “I am deeply grateful for the generosity of our individual donors, sponsors, and community partners and we look forward to another decade of providing hope and support in the fight against women’s cancer.”

“We have made tremendous strides in diagnosing and treating breast and gynecologic cancer, but we know there is still more work to be done,” said Generosa Grana, MD, Director of MD Anderson at Cooper. “Thanks to the backing of Pink Roses Teal Magnolias we are able to expand our research capabilities – resulting in more innovative treatments – and grow our programs that support survivors throughout their cancer journey.”

About The Cooper Foundation

The Cooper Foundation serves as the philanthropic, community outreach and community development arm of Cooper University Health Care, one of the largest health systems in southern New Jersey with over 100 outpatient offices and its flagship, Cooper University Hospital located in Camden, NJ.