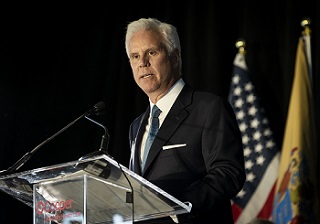 George E. Norcross III, chairman of the Board of Trustees at Cooper University Health Care, announced a $2 billion expansion of the Camden-based academic health system.

“Not only does this announcement represent the culmination of Cooper’s amazing turnaround since it faced bankruptcy at the turn of the century, but it is also a sign of our commitment to and faith in Camden, its residents, and our shared future,” said Mr. Norcross. “Cooper’s commitment to its home community is a model of how corporate leadership can spark imagination and new opportunities that benefit local residents. Camden’s transformation from being America’s poorest and most dangerous city to one on the rise is a national model of what cities can achieve with commitment, faith, and hard work.”

The $2 billion expansion will add three new clinical towers with more than 100 new, private rooms. The new, environmentally sustainable facilities will include emerging technologies and innovations to provide advanced care and support, and expand education and teaching space at South Jersey’s only academic health system that will help attract and retain the very best specialists and medical experts.

“Cooper has dreamed big and achieved their dreams of transforming into a leading academic health system in the South Jersey region,” said Ms. Ripa, who was unable to attend as scheduled, and sent her message via video. “Having grown up in the area, it’s especially meaningful to be invited to participate in the announcing of Cooper’s latest major investment, this time in Camden, demonstrating their commitment and the power of imagining a bigger and better future for local residents.”

Ms. Ripa, a Camden County native, has a long connection to Cooper. For a number of years she was the public face of the health system. Ms. Ripa helped launch the Ripa Center for Women’s Health and Wellness at Cooper in Voorhees, a facility created by and for women offering comprehensive health center services close to home and work. Since its launch 15 years ago, the Ripa Center for Women’s Health and Wellness has supported thousands of women in the region with quality health care and expanded to a second location in Haddonfield in August. She also attended the opening of Cooper University Hospital’s Roberts Pavilion in 2008.

Since its nadir in 1999 when it was just weeks away from missing payroll, Cooper has transformed into one of the leading academic health systems in the greater Philadelphia region. Cooper comprises the busiest Level I trauma center (Cooper University Hospital) in the region, a leading cancer center (MD Anderson Cancer Center at Cooper), the only Level II pediatric trauma center in the Delaware Valley (Children’s Regional Hospital at Cooper), three urgent care centers, and more than 100 outpatient offices across South Jersey. With more than 8,900 employees, including 1,600 nurses and more than 850 physicians practicing and 450 advanced practice providers practicing in more than 75 specialties, Cooper is the largest private employer in both Camden city and county.

“Camden has seen a dramatic transformation in recent years as many state and local partners have worked together to improve the city, and Cooper has played an integral role in those efforts,” said Governor Murphy. “By supporting public safety, educational opportunities, and job creation in addition to providing quality medical care, Cooper has taken a holistic and meaningful approach to strengthening the health of the community it serves. I applaud this new expansion and Cooper’s ongoing work to improve the lives of Camden residents.”

“During the pandemic, Cooper ensured high-quality health care was accessible to every neighborhood in our community. It made heroic efforts to go into communities throughout our region and provide care for those in need. This $2 billion investment will increase Cooper’s capacity to deliver high-quality health care in the region and continue being a vital partner in promoting the health and wellbeing of our communities,” said Congressman Norcross.

“Today is a celebration of all the professionals who have served at Cooper over the last 135 years. Cooper has grown into an elite, nationally recognized academic health system, and this amazing transformation could only have been achieved through the tireless effort of dedicated and committed team members,” said Kevin O’Dowd, JD, co-CEO of Cooper. “Today, we say thank you to all those who have served on the Cooper team for making possible this milestone announcement which will solidify our role in the community for the many decades to come”

“This expansion will give our dedicated professionals the resources, innovation, and flexibility to continue to serve, heal, and educate our community and allow us to further recruit top-notch talent,”  said Anthony J. Mazzarelli, MD, JD, MBE, co-CEO of Cooper.

As a regional health care leader, Cooper has been committed to helping city residents lead healthy, full lives and has helped spearhead Camden’s turnaround. In addition to dramatically expanding its operations and expertise in recent years with the addition of the MD Anderson Cancer Center at Cooper and Cooper Medical School of Rowan University, Cooper dramatically improved EMS service in the city when it took the service over in 2016.  The Cooper EMS team has achieved a response time, from dispatch to arriving on scene, of eight minutes or less for 91.7% of their advanced lifesaving (ALS) calls. Cooper EMS was the first EMS team in the nation to institute a Suboxone program in 2019 to save lives in battling the opioid crisis.

Cooper is serving its broader community in many other ways, including the HeroCare Connect program in partnership with Deborah Heart and Lung Center, which provides specialty care to active and retired military personnel and their families. Cooper’s trauma center is the busiest in the region – the only Level 1 trauma center in South Jersey – and its experts train medical providers from every military branch – one of the only health systems in the United States to do so. Cooper’s trauma experts also provide training to multiple local, state, and federal government agencies, including Project Cadence, a new training program with the Department of Homeland Security.

Cooper is a founding member of the Camden Health and Athletic Association (CHAA), a non-profit organization dedicated to expanding youth sports programs and health initiatives in the City of Camden.  Since 2016, CHAA has helped more than 1,000 Camden children take part in a variety of sporting activities. Cooper is also helping put Camden residents to work with a variety of free training programs leading to jobs as medical coders and critical care technicians among others.

Cooper also provides direct assistance to those in need through a variety of in-kind donation programs. For the past 10 years, Cooper employees have generously donated backpacks and school supplies to Camden students. Last year, 33 nonprofit organizations in Camden received grant awards from the Camden Community Grant Program, established with $1 million in donations by founding sponsors Conner, Strong & Buckelew; American Water; the Michaels Organization; National Freight Industries; and The Cooper Foundation. The program addresses social determinants of health by funding initiatives that focus on community-building activities, including improvements to housing, workforce and leadership development, coalition building, and health improvement.

Over the last decade, Camden has transformed from the country’s poorest and most violent city into a place that then-President Barack Obama in 2015 said was “a symbol of promise for the nation.” Through an unprecedented partnership among government, business, non-profits, and religious leaders focusing on improving the four quality of life pillars in the city and for city residents, Camden:

In recognition of its progress, Standard & Poor’s rating service recently lifted the city’s bond rating to A- for the first time in at least 40 years.

Today’s announcement builds upon the more than $3.5 billion that has been invested by private and not-for-profit employers and developers and is just one of many upcoming investments to the city and its future. The State of New Jersey recently approved $300 million for the rehabilitation of the Rand Transportation Center, a vital link to the Camden suburbs and Philadelphia that will spur further investment in the City as it continues its unprecedented revitalization.