In 2011, the Sepsis Alliance declared September to be Sepsis Awareness Month, an annual opportunity for individuals, health care professionals in every area of medicine, and organizations big and small to help save lives by raising awareness of the leading cause of deaths in U.S. hospitals – sepsis.

Sepsis is the body’s overwhelming response to infection, which can lead to tissue damage, organ failure, amputation, and death. Sepsis affects an estimated 49 million people each year.

While sepsis is more likely to affect young children, older adults, people with chronic illnesses and/or weakened immune systems, sepsis is an equal opportunity killer, affecting people of all ages and levels of health. In fact, infection/sepsis is the second leading cause of pregnancy-related deaths.

What are the symptoms?

When it comes to sepsis, remember it’s about TIME. Watch for: 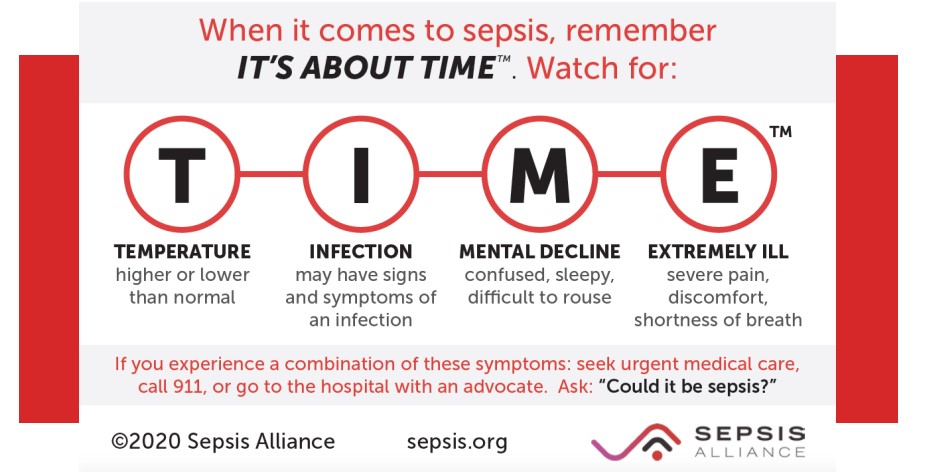 Why does time matter? For every hour treatment is delayed, the risk of death increases by 4% to 9%. As many as 80% of sepsis deaths could be prevented with rapid diagnosis and treatment.

If you have a combination of the symptoms above, especially if you recently had a cut, surgery, invasive procedure, or infection, call 911 or go to a hospital and say, “I am concerned about sepsis.” The sooner you are treated for sepsis, the better your outcome.

Can you prevent sepsis?

Sepsis can’t always be prevented, but the risk drops when you try to prevent or treat infections as quickly as possible. You can do this by:

Sepsis IS a medical emergency!