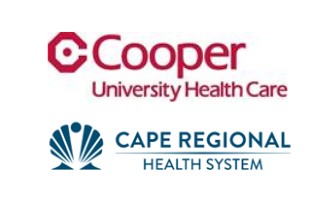 (CAMDEN and CAPE MAY, NJ) – Cooper University Health Care and Cape Regional Health System announced that the two systems have signed a Letter of Intent to merge. When complete, this historic partnership will bring together two respected health systems to expand access to specialty health services to residents and visitors of Cape May County.

“For more than 135 years, Cooper has continued to expand its reach to provide advanced health care to the people of South Jersey,” said George E. Norcross, III, Chairman of Cooper University Health Care’s Board of Trustees. “This merger of two trusted health care organizations will benefit tens of thousands of residents and visitors to Cape May County and strengthen the overall health care system in South Jersey.”

“As it becomes more and more challenging for smaller health systems to operate independently, merging with Cooper made the most sense as we share the same commitment to the communities we serve and to providing the highest quality care to our patients,” stated Garry Gilbert, Chairman, Cape Regional Health System Board of Trustees.

“Cape Regional and Cooper have had a strong working relationship for many years as Cooper has staffed our Intensive Care Unit with fellowship-trained Intensivist physicians as well as provided tele-ICU, tele-stroke, and tele-neurology services that have truly enhanced the quality of care for our community,” said Joanne Carrocino, President & CEO of Cape Regional Health System.

Cooper, with its market leading MD Anderson Cancer Center at Cooper, is based in the City of Camden and is southern New Jersey’s only academic health system and Level I trauma center with $2 billion in revenue. Cape Regional Health System has earned the Gold Seal of Approval from the Joint Commission and is an integrated healthcare delivery system serving the residents throughout Cape May County.

“Cooper is incredibly honored to be given an opportunity to partner with the nearly 1,500 Cape Regional team members who have built a distinguished health system of high-quality clinical outcomes and commitment to their community,” said Kevin O’Dowd, co-CEO of Cooper. “We look forward to working with our future colleagues at Cape Regional to build upon this tremendous legacy of service to residents of the Cape May region.”

The combined health system will have:

“By expanding our current working relationship with the Cape Regional team, we will be able to bring additional advanced cancer and specialty health care services to local residents close to where they live,” said Dr. Anthony Mazzarelli, co-CEO of Cooper.

The signing of the Letter of Intent is the first step in a lengthy process. Cooper and Cape Regional will be working toward signing a Definitive Agreement in March 2023. Thereafter, the health systems will seek regulatory approval for the merger, which could take until the first quarter of 2024.

Cooper University Health Care is a leading academic health system with more 8,900 employees including 1600 nurses, and more than 850 employed physicians and 450 advanced practice providers. Cooper University Hospital is the only Level 1 Trauma Center in South Jersey and the busiest in the region.  Annually, nearly two million patients are served at Cooper’s 635-bed flagship hospital, outpatient surgery center, three urgent care centers, and more than 105 ambulatory offices throughout the community. Cooper has been named as one of America’s Best Employers by Forbes for two consecutive years and was recognized as one of the top hospitals in New Jersey and as a top-performing hospital nationally in numerous specialty services by U.S. News & World Report’s 2022-2023 Best Hospitals annual survey. Additionally, Cooper has earned the Healthgrades Patient Safety Excellence AwardTM for four consecutive years, placing Cooper among the top 5% of all short-term acute care hospitals.

Cape Regional Medical Center is accredited by and received the Gold Seal of approval from The Joint Commission.