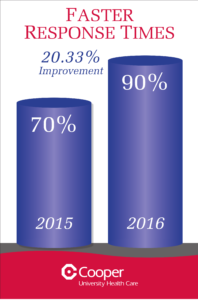 “When Cooper University Health Care took over EMS services on January 2, 2016, we promised the residents of the City of Camden that we would improve response times, services, and community involvement,” said George E. Norcross III, Chairman of the Board of Trustees at Cooper. “We have delivered on those promises by responding to more calls, reducing response times, and building stronger relationships with the community we have been serving since 1887.”

“We are proud of the hard work of our professional team in launching a new EMS program, and living up to our promises to improve access and service to city residents as well as deliver on our mission to serve, to heal, to educate,” said Adrienne Kirby, president and CEO of Cooper University Health Care.

Cooper released the following data on its first year of EMS operations in Camden: 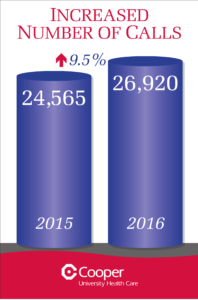 One national benchmark states that advanced life support should respond to incidents within eight minutes on 90 percent of calls. Cooper promised to meet this benchmark and delivered. In 2016, Cooper EMS responded within the eight-minute benchmark for 90.25 percent of ALS dispatches, a 20 percent improvement over 2015.

“One of the primary goals we established was to improve eight-minute benchmark for advanced life support response times to Camden residents,” added Norcross. “Our dedicated team is responding to more calls and helping more Camden residents, and more than 90 percent of the time our advanced life support teams respond within eight minutes. Simply put, Cooper EMS is providing more, access to emergency services — quicker — for city residents.”

By strategically scheduling resources to meet demands, Cooper EMS has also reduced its reliance on mutual aid EMS from neighboring communities. In 2016, mutual aid BLS dispatches into Camden were reduced from 653 dispatches to 240, a more than 63 percent decrease. 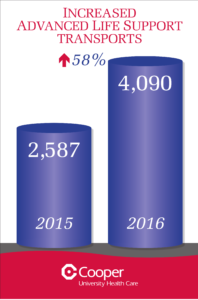 Prior to Cooper taking over EMS, the ALS units responding to calls were unable to transport patients to hospitals. BLS units were required to do so. Cooper’s ALS units are all transport capable, which frees up BLS units to respond to other emergencies. Cooper’s EMS team includes two EMS board-certified Cooper physicians, who ride with the teams on some emergency calls and also provide quality assurance and staff training. In addition, Cooper has established an EMS fellowship training program for physicians, one of only two in New Jersey and 46 in the United States.

Cooper EMS has also worked to build strong community relationships and has provided training to a number of other emergency service agencies serving the City of Camden.

“We have provided bleeding or hemorrhage control training to the members of the Camden Fire Department and Camden County Police Department and have received specialized training from them in return,” said Rick Rohrbach, BSN, RN, CFRN, CCRN-K, MICP, EMS Director – Air & Ground Services at Cooper.

The Cooper Trauma Center recently purchased $10,000 of tourniquets that were given to all officers in the Camden Metro Police Department in conjunction with the training they received from Cooper EMS.

In addition, Cooper EMS also participated in more than 30 community events that included wellness fairs, educational events, and stand-by services at community and sporting events. As a result of its first-year record of service, Cooper EMS was nominated for the “New Jersey EMS System of the Year” at the New Jersey Statewide Conference on EMS held in November 2016.

“We believe these tremendous results demonstrate the wisdom of the legislation requiring that Level I trauma centers, the experts in emergency care, run the EMS in cities where they are located,” added Norcross.

Press kit with additional information is available by clicking here.