Last week’s Black History Month Science and Medicine Trivia Contest was a brain buster! We had 96 entries, and 36 people got every question right.

We let the Wheel of Names make a random selection from among those with correct answers and … Waniesha Goldston of the Cooper Advanced Care Center is our winner! 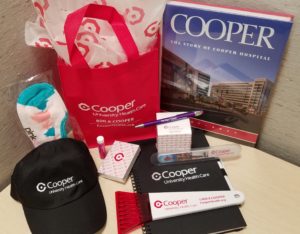 Congratulations to the other entrants who answered 100% of the questions correctly:

Watch for our next Black History quiz next week for your chance at a prize. Hint: Better sharpen up on your local black history!

Here are the answers to the Black History Month Trivia Contest for Science and Medicine:

1. What African American doctor invented the intradermal method of vaccination for smallpox, which proved less likely to cause infections and other complications at the injection site, during his service in World War I? This physician later became the first chief of surgery at an integrated hospital in the 1940s.
Answer: Dr. Louis T. Wright

3. In 1847, David Jones Peck, MD, was the first African American man to receive a medical degree in the United States. What medical school did he attend?
Answer: Rush Medical College

4. Physician and author Rebecca Lee Crumpler, MD, was the first African American woman in the United States to receive a medical degree from this school, and was its only black graduate.
Answer: New England Female Medical College

5. Charles Burleigh Purvis was the first black physician to attend a sitting president. Which president did he care for?
Answer: James Garfield

6. Mary Eliza Mahoney was the first African American to study and work as a professionally trained nurse in the United States, graduating in 1879. She co-founded what professional society?
Answer: National Association of Colored Graduate Nurses

7. Dolores Shockley, PhD, became the first African American woman to earn a doctorate in what profession in 1955 at the University of Pittsburgh?
Answer: Pharmacology

8. Black physicist John William Coleman was on the RCA team that transformed what technology into a means to obtain high-resolution images of biological specimens:
Answer: Electron microscope

9. Percy Julian, PhD, regarded as one of the most influential chemists in the United States, created a drug treatment for glaucoma, invented Aero-Foam to extinguish fires, and discovered how to synthesize progesterone, testosterone, and cortisone. What circumstance in his early life did not prohibit him from eventually graduating college Phi Beta Kappa?
Answer: He did not attend high school because none in his city was open to black students

10. Alice Ball, a scientist who was the first African American and first woman to graduate from the University of Hawaii with a master’s degree in chemistry, died when she was only 24. Despite her short life, she discovered the first successful treatment for what disease?
Answer: Hansen’s disease (leprosy)