Cooper University Health Care has named Jamie Ritz, BSN, RN, of Blackwood, NJ, as the winner of the William A. Schwartz, Jr. Nurse of the Year Award. Ritz, who works in Cooper’s Trauma Surgical ICU, also received the Award for Excellence in Trauma Nursing as part of Cooper’s Annual Nursing Excellence Awards presented during National Nurses’ Week (May 6 through May 12). The Nursing Excellence Awards recognize exceptional professional nurses and advanced practice nurses throughout the health system, as well as members of the collaborative care teams that support nursing.

The William A. Schwartz, Jr. Nurse of the Year Award is named in honor of the late Schwartz, a long-time member of Cooper’s Board of Trustees who committed a significant amount of his time and talents to Cooper. He was particularly passionate about Cooper’s nursing team and supporting them in their service to patients.

“As a Trauma ICU nurse, Jamie cares for some of the most complicated and seriously injured patients at Cooper. In the face of these challenges, she stands out for her knowledge, skills, and the compassionate care she provides each of her patients,” said Kathy Devine, DrNP, RN, NEA-BC, Senior Vice President and Chief Nursing Executive at Cooper. “Jamie is a role model and embodies what it means to be a Cooper nurse.”

Recognizing the importance of teamwork in health care, Cooper also honors an outstanding team each year in addition to individual awards. In 2022, Cooper’s Roberts Pavilion 9 Medical/Surgical Unit and the Emergency Department were named as co-recipients of the Team of the Year Award.

“We are especially proud to honor our Pavilion 9 and Emergency Department teams for the exemplary care and dedication they demonstrated over the past year. Each team faced challenges unique to their own units on a daily basis, and continued to provide the highest level of care uninterrupted to the thousands of patients who flowed through their units,” said Dr. Devine.

“Cooper’s success is due in large part to the skill and commitment of our nursing team and the dedication they demonstrate every day, with every patient. During Nurses’ Week, we honor and thank our nurses for their innumerable contributions to Cooper and the community,” said George E. Norcross III, the Chairman of the Board of Trustees of the Cooper Health System, Cooper University Hospital, and MD Anderson Cancer Center at Cooper.

“Despite the enormity of the task in battling COVID-19 for more than two years as well as treating thousands of other patients, our nurses demonstrated resiliency and compassion under some of the most demanding circumstances,” said Anthony J. Mazzarelli, MD, JD, MBE, co-CEO at Cooper. “I congratulate our award winners and all of our nurses for their extraordinary dedication to our patients during National Nurses Week and every day.”

“Congratulations to this year’s award winners. Cooper’s nursing professionals continue to inspire with their tireless effort and dedication in not only treating and healing their patients but in serving their fellow Cooper team members,” said Kevin M. O’Dowd, JD, co-CEO at Cooper.

All of the award winners were nominated by their colleagues for their commitment to upholding the Cooper mission “to serve, to heal, to educate” and are supported by gifts from generous donors to The Cooper Foundation.

“We are grateful for the generosity of our donors which makes these awards possible, allowing us to recognize Cooper’s outstanding nurses in a meaningful way,” said Philip A. Norcross, chairman of The Cooper Foundation, the philanthropic arm of Cooper University Health Care.

Three new awards this year were named in honor and memory of Lori Osinski, RN, a long-time Cooper nurse who died in 2020.  The complete list of 2022 Cooper Nursing Excellence Awards winners are available here. 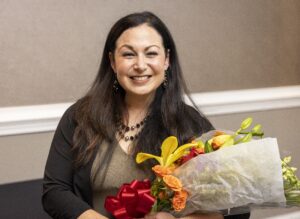 Jamie Ritz, BSN, RN, recipient of the William A. Schwartz, Jr. Nurse of the Year Award.