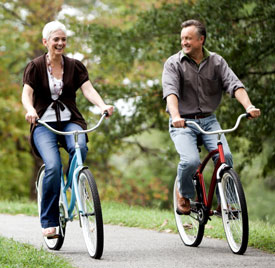 Endurance exercise – jogging, bicycling, walking, and the like – can stop us from looking and feeling old, and might even help us live longer, or so a new study of mice suggests.

Published February 21 in the journal Proceedings of the National Academy of Sciences, the study, conducted by researchers at McMaster University, Canada, found that premature aging in nearly every organ in the body was completely prevented in laboratory mice that ran on a treadmill three times a week for five months.

The mice were genetically engineered to age faster than normal mice via alterations affecting their mitochondria – the so-called powerhouses within cells that generate energy for nearly every cell in the body. Theory has it that, as we age, mitochondria become less efficient, resulting in the steady decline in bodily tissue and organ function.

But, for the study’s genetically disadvantaged mice that regularly ran on the treadmill, the aging process was halted. Those mice looked as young as healthy mice while their sedentary counterparts were balding, graying, physically inactive, socially isolated and less fertile, the researchers said.

The researchers also noted that other studies that tried to treat these animals with medication and calorie reduction showed those strategies to be less effective for slowing aging.

While evidence from this new animal study shows promise in endurance exercise as an effective anti-aging therapy, studies in humans have clearly shown that endurance exercise reduces the risk of many chronic, age-related diseases and conditions.

“There is no doubt that using your body will keep it healthy and stave off many of the ailments and conditions associated with aging, such as heart disease, type 2 diabetes, and joint and muscle pain, to name a few,” said Cooper University Hospital’s David B. Gealt, DO, Assistant Director of Sports Medicine at Cooper Bone & Joint Institute.

He added that anyone thinking about starting an exercise program of any kind should first consult with his or her doctor. In the meantime, Dr. Gealt offers the following information to help you get started on the right track:

Build up your endurance gradually, starting out with as little as five minutes of endurance activities at a time if necessary. Beginning at a lower level of effort and working your way up gradually is especially important if you have been inactive for a long time. Your goal is to eventually work your way up to a moderate-to-vigorous level that increases your breathing and heart rate. Plan to build up to a minimum of 30 minutes of endurance exercise on most or all days of the week. More often is better, and every day is best.

But, don’t forget to take the proper steps to “prime” your muscles before and after activity, which should involve more than just stretching.

“There have been studies to determine the benefits of warm-up stretching prior to activity. What the studies show is, if the muscles are ‘cold,’ aggressive stretching can cause some irritation within the muscle fibers and even cause possible injury. Ideally, it’s best to start with a short warm-up, such as a light jog or biking for 10 to 15 minutes, to increase your heart rate and get the blood moving to the muscles before beginning a mild stretching program to further loosen up the muscles. Stretching should not be so aggressive that it causes pain. Following your exercise activity, it is beneficial to perform a stretching program along with a cool-down, which can be simply walking on the treadmill or biking at a low level without resistance, to try and relieve some of the lactic acid build-up in the muscles and prevent them from tightening up. This also can help prevent the delayed-onset muscle soreness which many people may feel after a workout, as much as 24 to 48 hours later.”