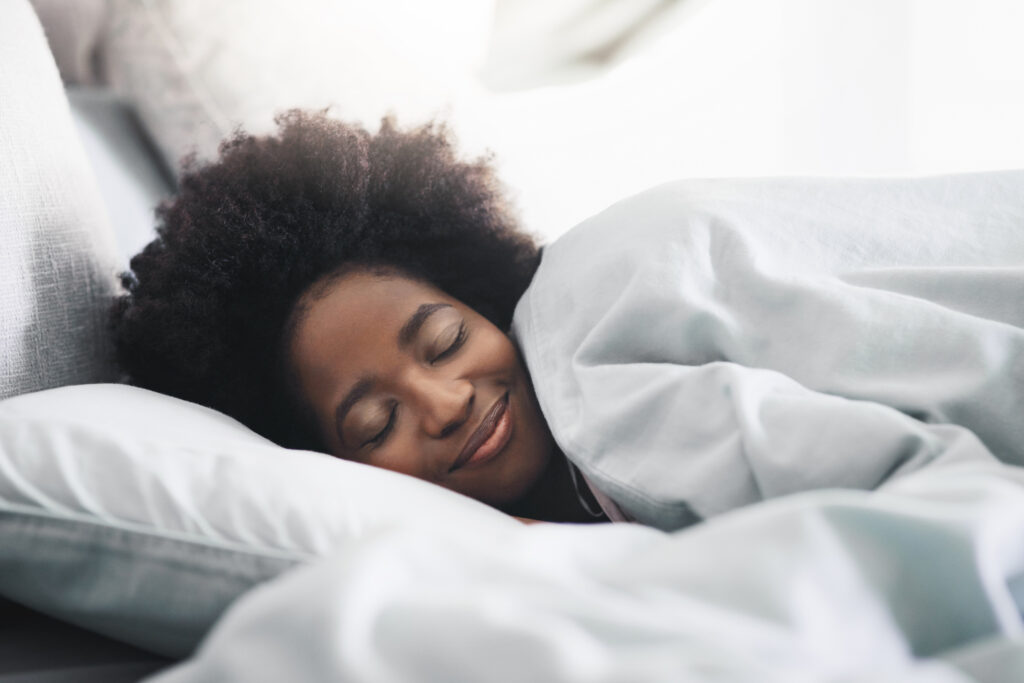 How often do you have a full night—at least seven hours—of uninterrupted sleep? If your response is “every night,” consider yourself lucky.

A 2018 study of older adults reported that 63.3% of women experienced symptoms of insomnia compared with 36.7% of men.

“Chronic insomnia can interfere with your ability to complete daily tasks, work, and concentrate,” says Stephanie Flaherty, DO, a family medicine physician with Cooper Care Alliance. “It can alter your mood, leading to irritability and depression. Insomnia can also cause health problems, including heart disease, depression, and stroke.”

Insomnia is the inability to get to sleep or stay asleep, wake up too early, or to feel tired after three or more nights a week for at least three months.

Primary insomnia is a disorder that is not caused by a medical condition, medication, or other underlying issues. Secondary insomnia happens as a result of other conditions or as a side effect of medication.

“Sleep disturbance is most common in people who have stress or mental health issues or who work nights or have an irregular sleep schedule,” Dr. Flaherty says. “Medical conditions such as sleep apnea, asthma, and fibromyalgia can also interrupt sleep.”

Some conditions that are known to cause insomnia include:

Why Is Sleep Important?

Sleep allows our bodies and brains to repair themselves.

“Although our bodies may be at rest, our brains tend to be quite busy while we sleep, clearing away toxins that build up during the day and processing information so that we can learn and form memories,” Dr. Flaherty explains.

A good night’s sleep is essential to just about every process in your body. It aids your physical and mental functions once you wake and aids in your ability to fight disease and develop immunity. It also boosts your metabolism and lowers your risk of chronic disease.

Why Is Insomnia More Common in Women?

“The hormonal changes that women experience during the month and throughout their lives are believed to be responsible for their increased risk of insomnia,” Dr. Flaherty says.

Menstrual cycles: Sleep disturbance can begin at the onset of menstruation. Fluctuating hormone levels can alter sleep stages, especially for those with severe PMS, known as premenstrual dysphoric disorder. Girls and women are especially prone to insomnia in the days leading up to their period, when levels of estrogen and progesterone fall.

Pregnancy: A woman experiences substantial hormonal changes during and after pregnancy. Major hormonal shifts begin during the first trimester and can cause fatigue, morning sickness, weight gain, and other changes. These continuing changes become especially troublesome in the third trimester, when difficulty finding a comfortable position, leg cramps, and the need to urinate frequently can interrupt sleep several times each night.

Postpartum: Once the baby is born, things don’t get easier for a while. Estrogen and progesterone levels fall dramatically within 24 hours of giving birth. Physical and emotional changes can create daytime sleepiness and sleeping problems, and the demands of round-the-clock infant care can limit sleep to just a few hours at a time.

Perimenopause and menopause: As the body’s hormonal production begins to ebb, women can experience hot flashes and night sweats that disturb sleep. Hormonal changes can also alter a woman’s circadian rhythms—the body’s natural 24-hour cycle of physical, mental, and behavior changes—and the body’s ability to regulate temperature during a regular sleep-wake cycle. During this time, a woman is more likely to experience mood disorders and physical problems that contribute to insomnia.

Bladder issues: Women are twice as likely as men to experience urinary incontinence and other symptoms of overactive bladder. Studies estimate that 76% of women 40 and older report the frequent need to urinate at night.

Getting a Good Night’s Sleep

It’s not unusual to experience an occasional sleepless night. If a bout of insomnia results from a short-term issue, such as a schedule change, it will probably resolve itself. However, chronic insomnia can be dangerous and will usually require the help of a health care provider.

“Over time, chronic insomnia can lead to accidents and health problems, such as obesity, diabetes, and high blood pressure,” Dr. Flaherty says. “In addition, the exhaustion it causes can increase the risk of falls, especially for older women.”

Try these tips if you have trouble sleeping once in a while or if you experience chronic insomnia.

If you have chronic insomnia or if these at-home remedies don’t work, consult your health care provider, who can perform tests to find the source of your sleeplessness. If sleep disruption is a side effect of another issue, your provider may recommend treating that condition as part of the overall plan to help you get a good night’s sleep.

Depending on its source, treatment for insomnia can include:

Cognitive behavioral therapy (CBT): This treatment helps you change thoughts and actions that may interfere with sleep. CBT is also used to treat depression and anxiety. You may need to see a therapist weekly for several months to see a change in your sleep patterns.

Prescription medication: Sedatives and certain antidepressants can be prescribed for insomnia. Some sleep medications can have serious side effects, including daytime sleepiness and increased risk of falls in older adults. They can also affect women differently than men, so you should take them only under your doctor’s supervision.

Over-the-counter medications: It can be tempting to try these medications on your own, but be sure to speak to your health care provider first. Many of these products include antihistamines, and you want to be sure that they will not interact with other medications. It’s important to remember that supplements such as melatonin are not regulated by the U.S. Food and Drug Administration and should only be used for a short time.

“Getting regular, uninterrupted sleep is essential to almost every aspect of your health,” Dr. Flaherty says. “If you are having trouble getting to sleep or staying asleep three or more nights a week for at least three months, talk to your health care provider about steps you can take to get the rest you need.”

Stephanie Flaherty, DO, is a family physician who cares for patients of all ages in the Cooper Care Alliance office at 1210 Brace Road in Cherry Hill. She is accepting new patients. Call 856.536.1515 or click here to schedule an appointment today.