By identifying the “red flags” as early as possible, you are on the path to giving the child what is needed to develop a solid foundation of fundamental skills, to allow success with reading.

This article originally appeared digitally in April, 2022 here. It is reposted by Cooper University Health Care with permission by EP Magazine. Subscribe for free at www.epmagazine.com. 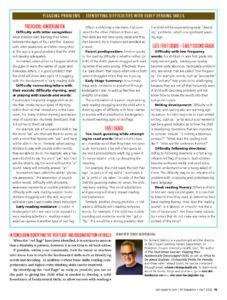 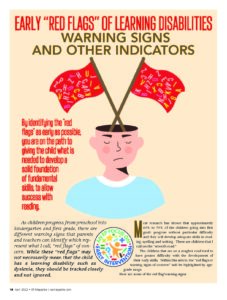 As children progress from preschool into kindergarten and first grade, there are different warning signs that parents and teachers can identify which rep­resent what I call, “red flags” of con­cern. While these “red flags” may not necessarily mean that the child has a learning disability such as dyslexia, they should be tracked closely and not ignored.

Most research has shown that approximately 60% to 70% of the children going into first grade progress without particular difficulty and they will develop adequate skills in read­ing, spelling and writing. These are children that I call on the “smooth road.”

The children that are on a rougher road tend to have greater difficulty with the development of their early skills. Within this article, the “red flags or warning signs of concern” will be highlighted by age-grade range.

Here are some of the red flag/warning signs:

In contrast, when a four or five-year-old child struggles to learn the names of upper and lowercase letters, it is good predictor that the child will show later signs of struggling with the development of early reading skills.

Difficulty connecting letters with their sounds; difficulty rhyming, and/ or playing with sounds and words: Preschoolers frequently engage with activi­ties that involve various types of rhyming within their normal interactions in the class­room. For many children rhyming and aware­ness of sound are intuitively developed, that is it comes to them naturally.

Researchers have called this ability “phone­mic awareness,” the awareness of sounds within words. Difficulty with phonemic awareness represents a possible predictor of difficulty with early reading success. Some children struggling with this skill, respond well when given appropriate direct instruction.

Early reading resistance: Children in kindergarten who are seen to be resistant to early reading activities or reading-related activities represent another type of red flag.

Often, a child may understand that com­pared to the other children in their class, their skills are not developing easily and they then become more insecure and avoidant as a result.

Early Stage Summary: In summary, these early predictors in preschool through kindergarten start to add up like they are weights on a scale.

The combination of a parent experiencing early reading struggling and the child who is showing signs of difficulty with letter names or sounds within preschool or kindergarten, represent warning signs or red flags.

Too much guessing while attempt­ing to read words: When children face an unfamiliar word that they have not previ­ously memorized, they will often guess at the word and substitute anything, even if it’s nonsensical or ends up disrupting the meaning.

For example, the child reads the text that says, “a picture of my rabbit,” and reads it as “a porto of my raber.” In spite of the fact that the guessing makes no sense, the child may keep reading. This word substitution and guessing will clearly impact reading comprehension.

Difficulty with low frequency words: For children in later first grade into early second grade, reading can quickly become quite laborious. Particularly problem­atic, are words that are called “low frequen­cy.” For example, words, such as “porcupine” and “volcano” may prove to be challenging because they are not all that frequently seen. A child with decoding problems will not know how to break the words into their component parts

Writing development: Difficulty with writing and spelling also are warning sign indicators. A child’s response to open-ended writing, such as, “write about your weekend” can be a good indicator as to how the child is developing. Questions that are important to consider include: “Is writing a laborious process?” “What does the spelling look like?” “How are the sentences formed?”

Weak reading fluency: When a child is in first and early second grade, it is essential to listen to how they read, to determine their basic reading fluency. How does the reading sound? Is it labored or smooth? Are there lots of hesitancies? Are there many substitu­tion errors that do not make any sense in the context of the story?

In Conclusion: Identifying the “Red Flags” and Building Bottom-Up Skills

If possible, within your community, look for tutors or teachers who know how to teach the fundamental skills such as identifying words and decoding. In addition to these basic skills, reading com­prehension and higher-order thinking skills can be mastered.

By identifying the “red flags” as early as possible, you are on the path to giving the child what is needed to develop a solid foundation of fundamental skills, to allow success with reading. 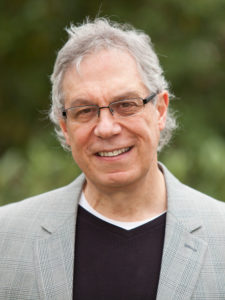 Dr. Richard Selznick is a psychologist and the director of the Cooper Learning Center, Department of Pediatrics, Cooper University Health Care. The author of “The Shut-Down Learner: Helping Your Academically Discouraged Child”, as well as “What to Do about Dyslexia: 25 Essential Points for Parents,” and three other related books. He can be contacted through email: selznick-r@cooperhealth.edu. To learn more about his books, blogs and podcasts, go to www.shut­downlearner.com and www.cooperlearningcenter.org.