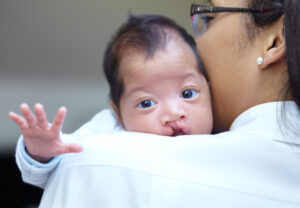 Cleft lip, cleft palate, and other craniofacial conditions are among the most common birth defects in the United States. In some cases, the cause of these defects remains unknown, even though they have been the subject of extensive research over the years.

Every July, Cleft and Craniofacial Awareness and Prevention Month provides  an opportunity to appreciate and celebrate the differences in every face and every smile. For more than four decades, the interdisciplinary team that is part of Cooper’s Cleft Palate and Craniofacial Program has helped broaden the smiles of those who have cleft lip, cleft palate, or a craniofacial deformity.

Cooper’s program is designated by the New Jersey Department of Health as a cleft-craniofacial center and meets the rigorous standards set by the American Cleft Palate-Craniofacial Association (ACPA). This designation by the ACPA places Cooper’s innovative program on a competitive level with centers in Philadelphia, Delaware, and New York, and is similar to the renowned Magnet Recognition Program for nursing. Learn more about our team and program on our website by clicking here.